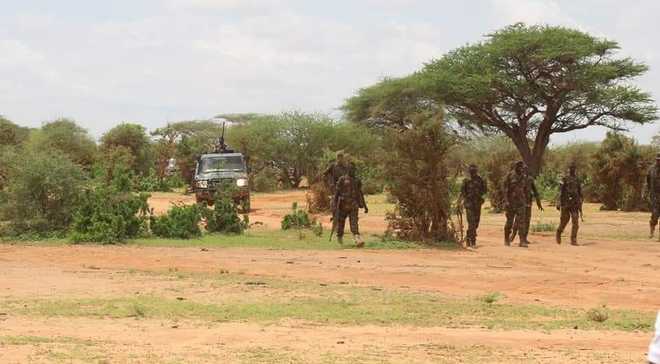 MOGADISHU, Somalia - Somali National Army [SNA] troops engaged in a fierce gunfight with Jubaland security forces, multiple sources have confirmed, barely a month after over 700 soldiers were deployed in Gedo.

The battle, which is currently ongoing, blew up in Balad-Hawo town and Border Point One areas, forcing unarmed civilians to seek refuge in neighboring Kenya, Jubaland officials said.

The source said: "Everything was cool until SNA troops started attacking Jubaland troops. This resulted in immediate retaliation."

Gunshots could be heard everywhere within the town with raw video footage showing residents scampering for their safety, preferably in Mandera town on the Kenyan side.

And already, several people among them security forces from either side are said to have succumbed to their injuries, with the confrontations still ongoing, the source added.

Tensions have been brewing Gedo, a region under the control of Jubaland, a Federal state in Somalia, which has been at loggerheads with Mogadishu administration.

The United States asked Farmajo to withdraw the troops and consider dialogue, terming the deployment as "unnecessary", adding that "it gives room for Al-Shabaab raids".

Abdirahman Abdishakur Warsame, the leader of the Wadajir party, condemned the violence in Gedo, warning that FGS is using SNA troops to ignite "civil war" besides creating "anarchy" in Somalia.

"It’s unfortunate that the national army, which has for years been readied to fight terrorists, secure the country and restore stability, is now being used to ignite civil war and create instability, derailing the war on terror," Abdishakur noted.

Somalia has been accusing Kenya of fueling tensions in Gedo by supporting regional JSF through KDF, with Farmajo insisting that "Kenya has no role in Jubaland".

Acting on threats by Gedo Deputy Governor Abdi Moalimu, who threatened to mobilize SNA to invade Kenya, Nairobi on Sunday distanced herself from the crisis, terming the allegations "fabrications".

In fact, authorities in Nairobi held 11 MPs from northeastern, who had held a meeting with Farmajo on Saturday without clearance by authorities, although they defended the trip saying that it focused on insecurity in NFDs.

“It is known that the Jubbaland forces and other forces in Somalia have not taken full control of the Gedo region leading to increased cases of insecurity in the North-Eastern region,” Bashir Abdullahi, the Mandera North MP said.

Rashid Abdi, a security analyst, warns that the deployment of SNA troops in Gedo was done in "bad faith", adding that the decision could degenerate into a full-scale war between Kenya and Somalia.

"Farmajo deployed troops to Gedo primarily to fragment Jubaland, stoke tension with Kenya, project FGS's new military might," he said. "The countdown to full-scale war has begun. And it will start in Gedo."

Farmajo has been facing criticism from federal states, with opposition leaders accusing him of plotting to "install his loyalists" ahead of December polls, a move they dismiss as "transient" political gain.

Besides the ongoing Gedo crisis, SNA troops also raided Dhusamareb, the regional capital of Galmadug, seizing the region from former allies ASWJ, a move which critics say will give room for Al-Shabaab takes over.