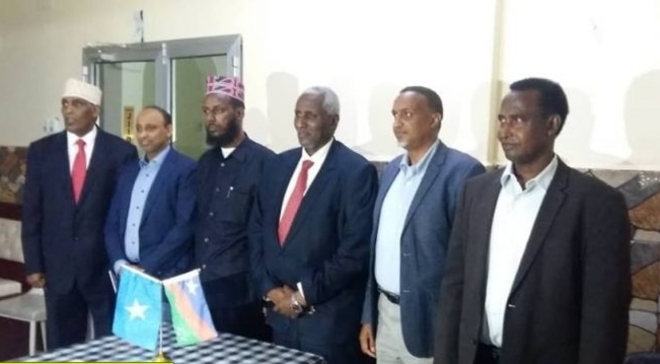 BAIDOA, Somalia - Tension is rapidly brewing in Baidoa city in advance of this month's election, with the candidates calling for greater transparency to ensure that the voting process is free and fair, Garowe Online reports.

Southwest regional lawmakers will head to the ballots on December 19 to pick a new president, in what will be the second election since the inception of the southern Federal Member State in mid-2014.

In a statement, three candidates, including former Al-Shabab deputy leader and spokesman, Mukhtar Robow raised question over the credibility and independence of the Election Commission after delaying the ballot for the 3rd time.

The Candidates Alliance led by Robow called for the urgent formation of Anti-corruption body for proper supervision and to ensure that the much-postponed presidential election is carried out in a transparent and credible way.

Furthermore, they said the new date set by the election commission for the vote could make it impossible for the most of the International Community to send observers to monitor the polls because of the "Christmas Day" festive.

Attention in recent weeks has turned to Baidoa, the interim capital of Southwest state, as high-level al-Shabab defector Mukhtar Robow is seeking the regional presidency competing against two government-backed candidates.

Somalia's Ministry of Security said earlier last month, saying Robow was not eligible to run for public office since he is still under U.S. sanctions imposed against him in 2008 when he was specially designated as global terrorist.

Robow who is seen as the top of the candidates in the presidential race turned a blind eye to the increasing pressure against him by the government and continued his campaign smoothly in Baidoa after gaining a broad public support.

The original date for the region's presidential election was November 17 before its initial postponement to November 28 and then to December 5. The election is slated for December 19 amid worries of irregularities in the voters' roll.

Meanwhile, the Aspirants have raised their concerns about the mounting "meddling" by the Villa Somalia in the upcoming polls and called for an intervention from Somalia's International partners.

Last weekend, the central government in Mogadishu has deployed hundreds of federal police officers to Baidoa to tighten its influence and interference in the vote and attempt to install its preferred candidates.

Local politicians and Federal MPs warned violence in the city if the new troops are not quickly pulled out and allow people to decide their future and next president.

The frequent delay and security personnel deployment added extra fuel to the fire, making the situation in Baidoa increasingly tense with UN mission in Mogadishu calling for a peaceful presidential election in the Southwest State.

Similar votes will take place in the Federal Member States of Puntland and Jubaland in early and late 2019 respectively.