Somalia: Two killed in IEDs in town near Kenya border 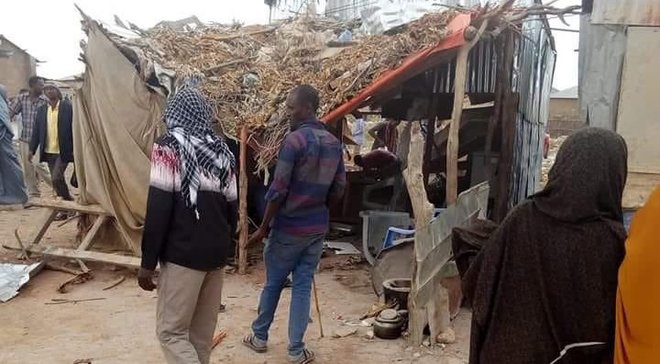 EL-WAK, Somalia – At least two people were killed, and six others wounded in simultaneous explosions in El-Wak town of Gedo region, near Somalia-Kenyan border on Thursday, Garowe Online reports.

Survivors describe the chaos and panic after the deadly explosions. Pictures from the scene showed the scale of the destruction in the arena following the attack.

There was a huge sense of confusion with dozens of people seen searching for their loved ones as security forces quickly cordoned off the venue and ambulances transferred the wounded to hospital.

A Somali military official, who did not want to be named, told Garowe Online that he saw the bodies of two civilians and 6 badly injured in the explosions which tore apart the tea shops and nearby buildings.

Military experts IEDs increasingly have been the weapons of choice for al-Shabab, the most powerful Al-Qaeda ally in East Africa which is fighting to topple the Western-backed weak government in Mogadishu.

The extremist group frequently targets Somali and AMISOM military convoys with IEDs as part of their deadly ambushes on supply routes in south-central Somalia.

El-Wak and other border towns have experienced insecurity cases in recent months, with more Kenyan police officers killed in IED attacks since 2017.