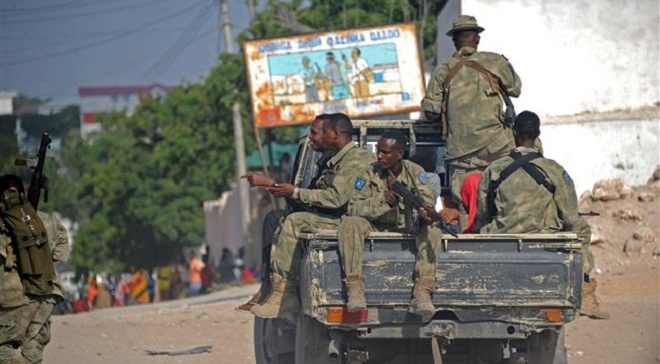 ELASHA BIYAHA, Somalia - At least two civilians were killed, several others wounded, some seriously in a deadly bomb explosion occurred in the outskirts of Somali capital, Mogadishu on Monday, Garowe Online reports.

Confirming the incident to GO, Elasha Biyaha settlement chief,  Abdisalam Mohamed, said the blast has resulted from a remote-controlled land mine targeted Somali Military convoy heading to the capital.

He gave no further details about the casualties of the government troops, as a result of Monday's blast, but local residents reported seeing wounded Somali soldiers being evacuated from the site of the attack.

In the aftermath of the incident, local security forces cordoned off the scene, and carried out an operation, however, no suspect was arrested for the bombing which claimed the lives of the civilians.

Today's attack was the latest in string of land mine blasts against Somali and African Union forces (AMISOM) on the main highway linking Mogadishu to Afgoye district in Lower Shabelle region.

Despite being driven out of Mogadishu in 2011, the Al Qaeda-linked Islamist group Al shabaab still capable of carrying out ambush attacks in the capital, and elsewhere in the country, in a bid to show their presence.