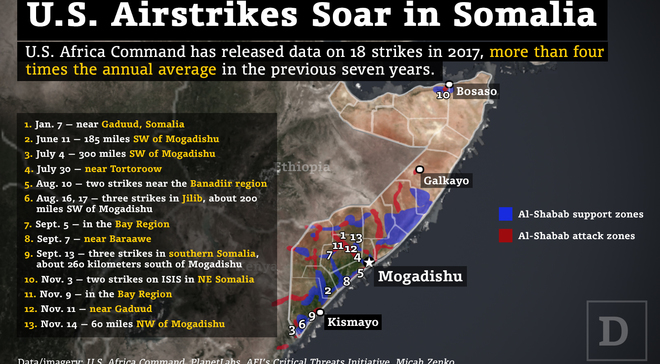 MOGADISHU, Somalia - An unprecedented number of US airstrikes against al-Shabaab in Somalia have caused significant casualties without seriously weakening the Islamic extremist group, research suggests.

The US has conducted 29 airstrikes in Somalia against al-Shabaab this year. In 2017, the US conducted 27 strikes against the al-Qaida affiliate, which has fought for almost a decade to impose its rigorous version of Islamic law on the country. Four further strikes last year were directed at a small group of fighters loyal to Islamic State in the east African country.

Some strikes against al-Shabaab have inflicted considerable casualties, with at least 60 recruits dying in an attack on a training camp in Mudug province in the centre of the country last month. But research published last week has suggested that although the overall number of attacks by the extremists has declined slightly, al-Shabaab is adapting to the increasingly lethal air campaign.

Analysts at the Mogadishu-based Hiraal Institute found that the group is conducting fewer massed attacks on government bases but the numbers of strikes against government offices and businesses that refuse to pay its taxes have increased markedly.

The Hiraal Institute report said: “There was a more than a twofold increase in bombings, suggesting that al-Shabaab made a conscious decision to switch to bombings as its primary source of targeting the Somali government and its allies as an efficient attack method that does not expose its men to attacks.”

On Friday, a triple bombing in Mogadishu killed dozens. The attack targeted hotels that had not paid protection money, security sources in the Somali capital said.

Many experts say the struggle against the insurgency has reached a stalemate. Hussein Sheikh Ali, the executive director of the Hiraal Institute and a former national security adviser, said: “Al-Shabab is definitely not getting stronger but the government is not getting stronger either.

“The US has been very active and hitting very serious targets but the holding territory is very difficult.”

It is clear that al-Shabaab is under pressure. The group has been extorting huge sums from starving communities and forcibly recruiting hundreds of children as soldiers and suicide bombers.

This has been revealed in intelligence documents, transcripts of interrogations with defectors and interviews conducted by the Guardian, which also show that swaths of central and southern Somalia are controlled by the extremists.

Most international analysts agree that the conflict is deadlocked. Bill Roggio, of the Long War Journal, a specialist counter-terrorism website, wrote last month: “Sustained attacks demonstrate that al-Shabaab retains the ability to launch conventional offensives, in addition to its terrorist attack capability.

The US military maintains that airstrikes “reduce al Shabaab's ability to plot future attacks, disrupt its leadership networks and degrade its freedom of manoeuvre within the region”.

A deep humanitarian crisis is ongoing in Somalia. Rising insecurity and conflict has caused further displacement in the Lower Shabelle region, the UN said.

More than 34,000 people have fled the area since the beginning of August, joining thousands more who fled earlier due to conflict, drought and floods. The majority were women and children.

The US has increased its military presence in Somalia since early 2017 to about 500 personnel after Trump approved expanded military operations.