Somalia: 4 militants killed in US airstrike against Al-Shabab 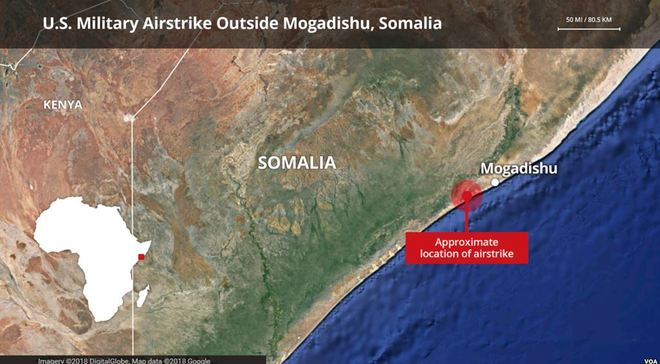 MOGADISHU, Somalia – The U.S. military says it has killed four militants in a fresh airstrike against al-Shabab in southern Somalia on Saturday on 4th November, Garowe Online reports.

The military's Africa Command (AFRICOM) said in a statement the American forces conducted a collective self-defense airstrike targeting al-Shabaab in the vicinity of Araara in Lower Jubba region.

The AFRICOM further said it assessed no civilians were killed in the strike carried out in coordination with the Somali government. The area has recently seen random attacks on local forces by extremists.

Al-Shabab officials remained unavailable for comment on the U.S. raid.

The airstrike was conducted after armed militants were maneuvering to attack partner forces during a patrol. No U.S. service members were present on the ground during this Somali-led operation.

Last year, the Trump administration approved expanded military operations against al-Shabab, which was blamed for the deadly truck bombing in Mogadishu on October 14 that killed more than 500 people.

Al-Shabab, which seeks to oust the UN-backed Federal Government, continues to hold parts of the country's south and central regions after being chased out of Mogadishu barely seven years ago.