Somalia: WHO seeks to contain cholera outbreak in the country 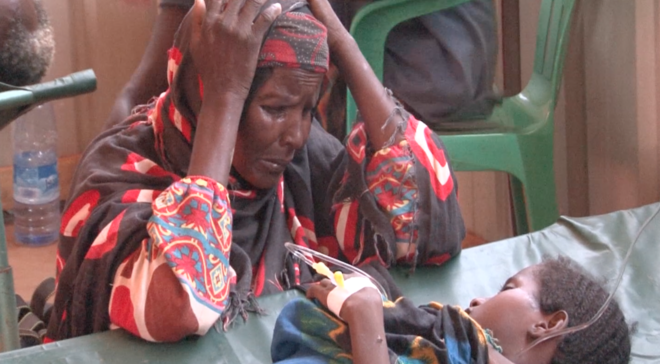 MOGADISHU, Somalia - The World Health Organization (WHO) is stepping up measures to contain a cholera outbreak in Somalia amid a decline in the number of cases and deaths in the past month.

The UN health agency, which cited figures from the Health Ministry of Somalia, said 32 new suspected cases of cholera, including one death were reported between Oct. 15-21.

"Since week 28 (seven weeks), there has been a significant downward trend in the number of new suspected cholera cases reported from different treatment facilities," WHO said in its latest report released on Friday.

"The cumulative total of cases is 6,498, including 43 associated deaths (case-fatality rate 0.6 percent), since the beginning of the current outbreak in December 2017 along the Shabelle River," it added.

Cholera is a gastrointestinal disease, usually spread by contaminated water and food, and can cause severe diarrhea that, in extreme cases, lead to fatal dehydration and kidney failure within hours.

According to WHO, the outbreak has spread in the south and central regions and the affected districts include Jowhar, Kismayo, Bulobarde, Afgoye, Merka, and Banadir.

However, it said the trend of cases has been declining in the past seven weeks, noting that only Banader region has been reporting cases and deaths in the last three weeks.

The UN health agency has called for robust investments in Somalia's fragile health care infrastructure as a means to accelerate the country's reconstruction after two and a half decades of civil strife.

WHO, which has been training several health workers in Somalia to help cope with the diseases, has also urged greater investments in surveillance infrastructure to enhance timely response to disease outbreaks in Somalia.