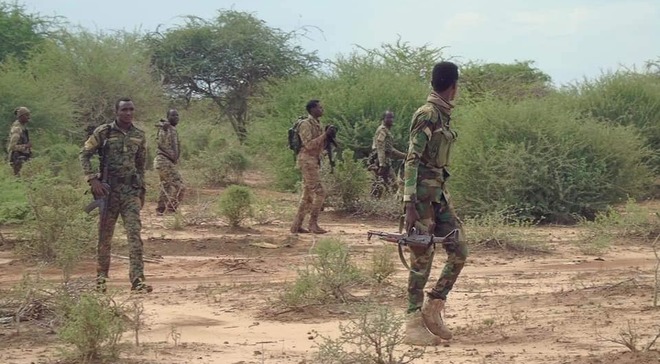 MOGADISHU, Somalia - A top Al-Shabaab intelligence chief was on Wednesday killed in a special operation waged by the US-trained Danab forces, multiple military sources confirmed, in the latest significant blow against the Al-Qaida linked group, which controls large swathes of rural southern and central Somalia.

Since March this year, the Somali National Army [SNA] contingents with the help of AU forces and those from the US Africa Command have been battling with the militants, leading to massive gains across the country, the first in as many years. The operations have been specifically waged in Shabelle and Jubba regions.

Military sources told Garowe Online that Abdulaziz Awoowe, an intelligence chief working with the deadly Amniyat wing, who also doubled as an explosive expert, was killed in Leego, a town that has been under the control of Al-Shabaab militants, following a covert operation in the region.

For months, military sources confirmed, the militant has been under the surveillance of security forces after it was established that he was one of the most dependable Al-Shabaab commanders. Under his reigns, sources said, the militant recruited many youths to the network and participated in arming them.

Abdulaziz Awoowe is also accused of waging deadly operations in Lower Shebelle against the security forces, senior government officials and civilians believed to be SNA spies. Under his reign, it emerged, many militants who had expressed interest to defect were executed.

The intelligence team is one of the wings of Al-Shabaab which plots operations and carries out massive attacks. The Al-Shabaab leader Ahmed Omar Diriye is believed to be the coordinator of the wing, especially in Mogadishu following the elimination of Muse Moalimuu, who was executed by the militants in March after a disagreement.

Leego town becomes the latest to fall to government forces in what could be a significant achievement given that the military has already claimed victory against the militants in the fragile Lower Shebelle region. Military Chief Yusuf Rageh said last week that the government troops were in charge of the region.

His death comes barely two months after another Amniyat commander, one Abdulkadir Commandos, was killed in a similar operation carried out in Lower Shebelle which saw the Danab forces combine efforts with the US Africa Command, leading to his death.

In a statement, the US Africa Command described him as a "dangerous operative' who also "engineered" revenue collection from innocent civilians. Shortly after his death, the Al-Shabaab militants waged another attack at a US military outpost in Janay Abdalla, about 50 KM West of Kismayo, killing two Danab soldiers and injuring a US serviceman.

Al-Shabaab has been fighting to control the Somalia government which was first installed by the United Nations. For 14 years, the group has masterminded deadly attacks both in Somalia and across the border, with Kenya being the worst hit in the cowardly attacks, especially in the northeastern and coastal strip.

Elsewhere, an enormous explosion was on Thursday heard in the Somali capital, Mogadishu with initial reports suggesting that a suicide bomber blew up the Black Sea area. Details of the attack remain scanty but the Al-Qaeda linked group is associated with such attacks.

At some point, the capital was under the leadership of Al-Shabaab before they were flushed out following massive operations by the Somali National Army and the Africa Union Mission Forces in 2011. But despite relative safety in the town, the militants have often sneaked into the city and carried perilous attacks mostly targeting security forces and civilians.