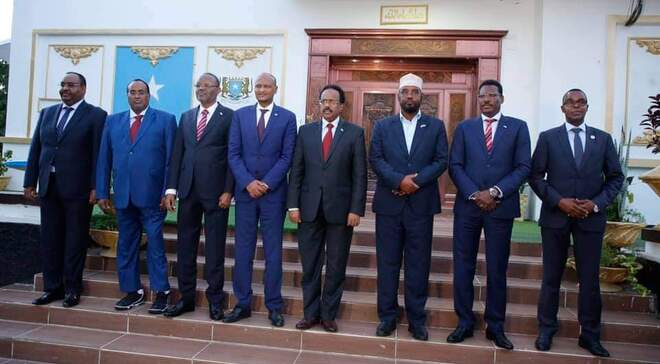 MOGADISHU, Somalia - Somalia will now go to elections starting November this year, a section of senior stakeholders said on Thursday, weeks after series of meetings in Dhusamareb and Mogadishu, which were brokered by members of the international community and local actors, amid simmering political tensions.

Initially, deep suspicions among the political elites had literally stalled the dialogue, with federal states and the opposition accusing President Farmajo of crafting a strategy to extend his term in office, having endorsed the universal suffrage polls, which the National Independent Electoral Commission [NIEC] had termed "untenable" within this year.

But in Mogadishu on Thursday, five federal states leaders, Mogadishu Mayor Omar Filish and Farmajo penned down a historic deal, which effectively solves the pre-election crisis should parliament approve it. The agreement reinstated an improved clan-based model, ending speculations on whether the country will hold early polls as anticipated.

Inside the deal, the team agreed to appoint Federal Electoral Commission which will work with another team from member states. The decision rules out participation of NIEC in the indirect polls, contrary to the initial Dhusamareb agreement that seemed to incorporate the team in the electoral arrangements.

Constituencies will be designated in two cities within the federal states, the agreement read, adding that the number of delegates who will vote each MP will be 101, representing the community sharing the parliamentary seat. This is a reduction from 301 that had been agreed at the Dhusamareb III conference.

The electors will be determined by traditional elders in collaboration with the civil society and member states with women getting a minimum of 30 percent slots to boost the affirmative action. It's not clear if this process will curb the infiltration of Al-Shabaab into parliament following reports that the group had compromised a section of elders.

For senators, stakeholders said, regional parliaments will pick the representatives, who will represent their interests in Mogadishu. Members of the Senate [Upper House] and Lower House from secessionist Somaliland will be elected by a joint delegation in Mogadishu, the agreement noted.

Somaliland runs a separate functional government and has been pushing for international recognition for three decades ever since claiming self-independence in 1991. The region has intensified quest for statehood in recent months by signing cooperation with a number of other states, including Taiwan, a region claimed by China.

The agreement also provides that elections to be held from November 2020 when the term of the current parliament expires to February 2021 when presidential elections are expected to be held. This effectively ends speculations about term extensions as earlier noted by critics.

Both parties agreed to collaborate on issues security which has traditionally destabilized the nation due to persistent Al-Shabaab attacks, adding that improved security would guarantee a credible electoral process. Al-Shabaab has been wreaking havoc in the country for the last 13 years.

The leadership further emphasized the need for freedom of expression including but not limited to allowing reporters to execute their work without intimidation. In the recent months, journalists have been subjected to harassment, intimidations, arbitrary arrests, and detentions, causing international outrage and condemnation.

The leadership hailed Galmadug for holding preliminary talks besides commending Farmajo for his commitment to broker the deal. Also recognized were the international actors, whose input was evident given meetings engineered by the US and the European Union before the deal was signed.

Abdinur Mohamed, the new Deputy Chief of Staff in Villa Somalia said: "Today's landmark Electoral Agreement is a milestone we are all proud of. The Mogadishu moment best describes Samareeb's success." The new model will be known as Constituency Caucus.

However, Abdirashid Hashi, the Director of the Heritage Institute of Policy Studies, a Mogadishu-based Think Tank, believes that the agreement is a bit vague given that a number of issues are not addressed, including how the elders and other stakeholders will choose the 101 electors.

"Other vague aspects of the political agreement made by the Federal President and regional leaders include: How exactly elders, regional governments and civil society will select 101 voters? What will exact roles of the federal election committee and regional election bodies be?" he wonders.

"Political Parties is thrown out of the window despite talking about it for years; if it’s discarded again, a reason should have been given; Previously, some tell residents of Mogadishu that they will have 13 senators, this issue seems to be discarded, but it is not mentioned," he adds.

Immediate former Prime Minister Hassan Ali Khaire, who was instrumental in kick-starting the negotiations, termed the outcome a "relief" to Somalis and called for "bipartisan" support from other stakeholders. Khaire, who has declared presidential candidacy, added that the deal is "fair to our people".

For Abdimalik Abdullahi, another political analyst on the Horn of Africa affairs, the deal was necessary since one-person-one-vote elections had proved an exercise in futility. The agreement, he adds, would pave way for timely elections as envisaged in the provisional constitution of Somalia.

"Direct elections were clearly unfeasible. Courtesy of lack of commitment and political goodwill. Now what is paramount is a timely election to be held in order to keep the tradition of peaceful political transition (something Somalia badly needs as history reminds us every time)," he noted.