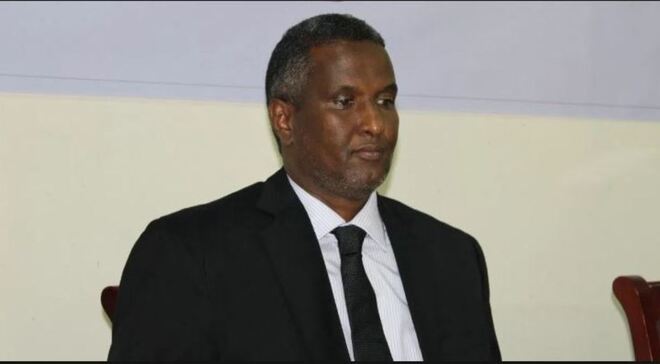 MOGADISHU, Somalia | In a rare show of solidarity, Somalia's opposition team has condemned Saturday's ouster of Prime Minister Hassan Ali Khaire, terming the move as a "plot" to craft unconstitutional term extensions which the former PM as opposed to in recent weeks.

Furious MPs kicked out Khaire in a vote of no-confidence which saw senior ministers voting against the PM in a chaotic parliamentary session. The motion came as a shock since there were no indications that Khaire was in wrangles with the Lower House or even his cabinet.

And in a statement, the Forum for National Parties [FNP], a conglomerate of six opposition parties, insisted that the removal of Khaire "disrupts and destroys" Dhusamareb deal, adding that the move would also pave way for "illegal" term extension by the current administration of President Mohamed Abdullahi Farmajo.

In Dhusamareb last week, Farmajo, Khaire, and regional leaders agreed to form a technical committee that would come up with recommendations on the most suitable electoral model before reconvening on August 15 to dissect the proposals. The team agreed to have timely elections, despite the fact that the National Independent Electoral Commission [NIEC] called for more time.

While Khaire and regional leaders were against delayed elections, Farmajo is said to have preferred a one-person-one-vote model, which the opposition leaders insist that would lead to team extensions. The president, however, denied having a preference for an electoral model.

Former President Hassan Sheikh Mohamud, who is also a member of FNP, termed the ouster of Khaire "tragic", adding that the scenario would plunge the country into political chaos. Farmajo, Sheikh Mohamud said, is planning for a term extension by sticking to the universal suffrage model despite the country's unpreparedness.

"Unconstitutional extension is not an option. Trying delay tactics will only make the situation from bad to worse. It is the redline one should not attempt to cross. The situation looks bleak, am sure Somali people will always keep the candle of hope lighted," the former president said.

In a tough-worded statement, the Wadajir party under the stewardship of Abdirahman Abdishakur Warsame also accused Farmajo of plans to "derail" implementation of Dhusamareb accord, which Khaire was a key stakeholder. Farmajo, the party argued, was keen to push for term extension.

"The party believes the biggest reason for the removal of the Prime Minister is a plot to derail implementation of Dhusamareb agreement. The president's goal also includes illegal term extension which would lead to political instability and insecurity chaos," read the statement which was issued on Saturday.

The president, Wadajir party said, "is not ready to safeguard the country's constitution, political accords, and the unity and stability of Somalia". The party had previously ruled out one-person-one-vote elections, citing time constraints given that the term of the current administration lapses in November 2020.

Wadajir now wants all stakeholders and the international community to chip in and save the country from plunging into unprecedented police chaos. The US had issued a similar statement, where it faulted the Lower House and President Mohamed Abdullahi Farmajo for Khaire's predicaments.

"To avoid political and security pandemonium, and the risk of civil war, Somali people, political stakeholders, and the international community, should support the government in implementing the Dhusamareb deal," the party added.

In a statement after Khaire's ouster, Farmajo seemed to blame the estranged former PM's predicaments on executive-legislature wrangles, arguing that they were undermining progress in the federal government of Somalia. It was anticipated that he would prevail upon MPs to spare Khaire.

"The rift between the government and the legislature is undermining the progress that has been made, and to that end, I've decided to consider the decision by House of Representatives as the foundation of our nationhood," he said despite the fact that no differences between parliament and executive had been reported.

Khaire emerged later on Saturday evening, arguing that "I decided to step down as prime minister of Somalia for the sake of the country" despite the fact that he fell on the floor of the House. The impeachment motion against him, he added, was "illegal and unconstitutional".

The former PM said he took compromises "for the interest of people to avoid a possible conflict". Further, he said, "I was not in office to rule but serve for the people", in a press conference which was partly streamed by his team before accepting his fate on Saturday.