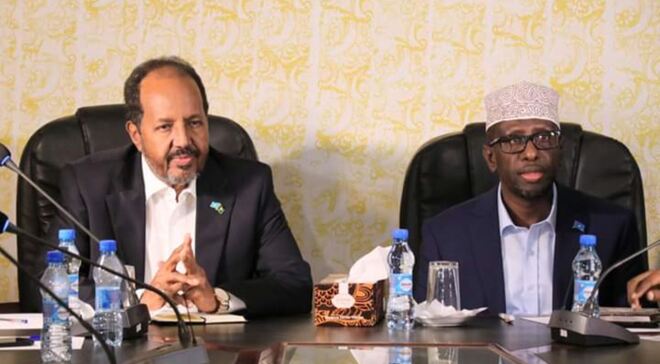 MOGADISHU, Somalia - Somali Government could be forced to go back to the drawing board after a section of opposition leaders rejected approval of the Judicial Service Commission [JSC], an independent body that is supposed to oversee critical functions of the Judiciary, in a country that has struggled to restore democracy.

Somalia's cabinet has since approved the body, in line with the provisions of the constitution, paving way for recruitment of officers who will among others, help in sourcing competent judges besides calling shots whenever some of them are accused of misconduct.

But the approval could be short-lived after the Forum for National Parties, a conglomerate of six opposition parties, rejected the move, terming parliament's decision unconstitutional. The team issued a tough-worded statement on Saturday.

In the statement, FNP insisted that the caretaker government "has no legal mandate" to approve JSC, adding that the body can only be formed by a "substantive" government. Currently, Somalia is under an interim government of Prime Minister Mahdi Mohamed Gulaid, who was appointed barely a fortnight ago.

Guled was brought in by President Mohamed Abdullahi Farmajo after parliament kicked out Hassan Ali Khaire, Somalia's long-serving Prime Minister. Khaire was fired for among others, failing to lead the country to a referendum and inability to prepare one-person-one-vote elections.

On July 30, acting Prime Minister Mahdi Mohamed Guled led the cabinet in appointing five members of the Judicial Service Commission. The current government, FNP added, does not have parliamentary confidence to appoint people to the national leadership of the institutions.

Somalia has struggled to institute a functional judiciary for almost three decades now. Despite having a judiciary, authorities prefer prosecuting the cases in military courts commonly called court-martial, and they are credited for bringing law and order in the country that is struggling with Al-Shabaab menace.

Court martials prosecute cases within the record time but members of the public have often insisted that the country should revive her civilian judiciary in compliance with international prerequisites for the administration of justice. Court martials are headed by members of the military.

The Forum for National Parties works under the leadership of former Presidents Sharif Sheikh Ahmed and Hassan Sheikh Mohamud. The two have been critical of Farmajo, who they accuse of implementing certain things will total disregard of the rule of law.

Although Villa Somalia is yet to make a substantive appointment of the Prime Minister, sources indicate that the head of government operations will be appointed within this week and that Farmajo prefers having someone from members of diplomatic corps than a career politician.

However, some analysts believe that he might pick someone from the opposition as a strategy to form a unitary government, a move that could pave way for a term extension. The country is yet to come up with an appropriate model for elections, forcing the country's leadership to pick a technical committee which would give a proposal on August 15.

Already, Villa Somalia insists that it will not support indirect elections, which analysts believe would allow the country to hold elections on time. Abdinur Mohamed, the presidency spokesperson, told BBC Somali Service that indirect elections would pave way for elections of Al-Shabaab to parliament.