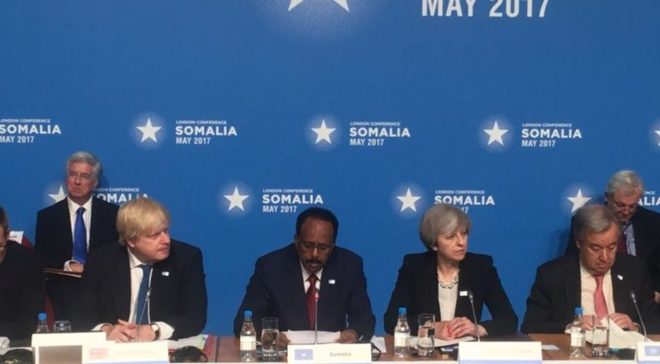 Representatives of 40 nations, leaders from across East Africa and other key partners, along with senior figures from international organizations are attending the conference. On the other hand, deputy Prime Minister, leaders of Somalia’s regional states, members from Somali Diaspora community are also reported in attendance of the high-level conference.

During his speech, President Farmajo noted that his government is pushing efforts to take advantage from the opportunity presented from Somalia's partners. “There have been many conferences in the past for Somalia, but today's meeting in London is different. I can assure you that Somalia will never turn back."

Kenyan President Uhuru Kenyatta called for joint cooperation against al-Shabaab group and support the African Union Mission in Somalia (AMISOM), to defeat and root out the militants in the coming two years.

Additionally, key partners have reaffirmed its commitment in political reform and good governance, to help build a more inclusive and democratic state, setting a clear path towards democratic ballot in 2020.

The two-day conference is set to focus on improving security, rebuilding the nation and boost development efforts to prevent the return of conflict across the country.

Somali leaders are expected to request from international partners to lift the arms embargo to help rebuilding the national army and debt relief program.