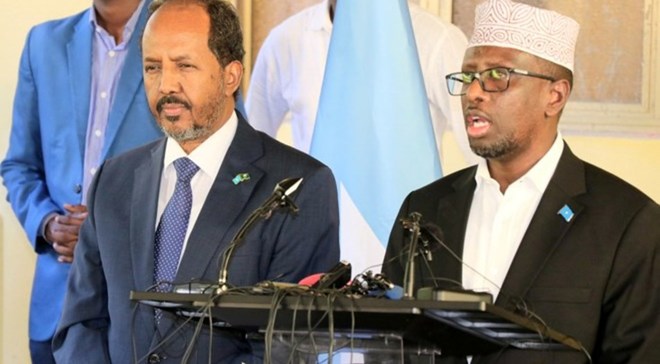 MOGADISHU, Somalia - Somalia's National Intelligence and Security Agency [NISA] could be in deep trouble following the latest calls to have independent investigations against remarks issued over Mogadishu bombing.

Forum for National Parties (FNP) on Wednesday accused NISA of "gross cover-up" on the attack, adding that the public was "badly misled".

While noting the need to safeguard people's safety, FNP asked oversight groups to issue summons to probe NISA's claims that a foreign country was involved in planning and executing the deadly attack.

"Appoint a commission of inquiry that conducts independent investigations to hold those responsible for negligence to account," read FNP's statement.

The attack left over 85 people dead and hundreds badly injured. It was executed on Saturday along with the busy Ex-Control police checkpoint West of Mogadishu.

Qatar and Turkey have airlifted over 38 people for advanced treatment abroad in solidarity with the Federal Government of Somalia.

FNP said, "the interior ministry and national security agencies should desist from distributing misleading information and creation of imagery enemies to lullaby the nation."

In a shocking statement issued by NISA, an unknown foreign country was dragged to the attack, although the spy agency did not give further details.

The attack, NISA argued, was planned by "foreign country" according to preliminary investigations.

"We have submitted to the national leaders a preliminary report indicating that the massacre against the Somali people in Mogadishu on 28 December 2019 was planned by a foreign country," read the tweet.

But in sharp contrast, President Mohamed Farmajo, who had been presumably briefed by NISA, was quick to blame Al-Shabaab militants.

For almost 72 hours, no group had claimed responsibility in the attack, further raising heated debate among politicians.

However, the Al-Shabaab terror group on Monday mourned the victims of the attack, conceding that the bomb blast targeted Turkish convoy and police officers.

Ali Dhere, the group's spokesman, said Al-Shabaab was increasingly getting concerned with Turkey's political and economic involvement in Somalia.

"On Saturday, the Mujahedeen executed an attack at Ex-Control, targeting an enemy Turkish convoy and the militias who were guarding them," he said.

Al-Shabaab's statement poked holes at the fragile FGS, which had squarely blamed a foreign country.

From the beginning, the Somalia government had struggled to give an accurate number of those who succumbed to the attack.

Pundits come in defense of FGS

Although the opposition has blamed NISA for "misleading" statements, analysts have defended the Federal Government of Somalia's stand.

He said: "By reading the press release below, one would wonder if any of the public figures in the FNP coalition has any hope left in them leading Somalia.

"Just to be clear, no one is disputing Al-Shabaab’s involvement in Saturday’s blast," he added in defense of the Federal Government of Somalia.

NISA is led by former journalist Fahad Yasin Dahir, who also calls shots in the FGS. He's a close ally of President Farmajo and has been previously dragged into Somalia's national politics.

Opposition leaders in Parliament have also demanded that NISA issues the report on the foreign nation involved in the attack.