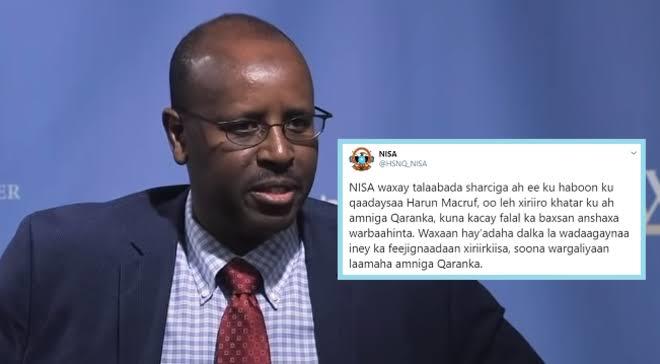 In a shocking tweet on Thursday, the powerful intelligence team accused Maruf, a reporter with Voice of America, of having "links" with elements who are a potential threat to the stability of Somalia.

The popular journalist, NISA added, is under "active" investigations and would face "appropriate" legal action once the team establishes "critical links" to the allegations. It's now clear who are the contacts the sleuths are investigating.

But the "grave" allegations almost faded immediately, with a strong battalion of social media users accusing the agency of "unfathomable" witch-hunt to cover up their "incompetence" by treating Maruf as a "punching" bag.

"This should elicit strong critical responses from the EU, UN, & the countries that essentially fund the Somali federal government," he said, terming Maruf as an "outstanding" journalist.

This one the first time NISA, which is synonymous with controversy, was publicly attacking a private citizen. Previously, the Fahad Yasin-led team had been in loggerheads with opposition leaders and Al-Shabaab militants.

Abdulmalik Abdullahi, a researcher, termed NISA's approach as "insensitive" adding that it publicly amounts to "sheer unprofessionalism" contrary to expectations against them and their role in building public confidence.

"It's simply embarrassing. Breeds skepticism and lack of faith in the institution," said Mr. Abdullahi. "I am now convinced that NISA is in dire need of an advisory on communication and crisis management."

Maruf, who operates from Washington DC but often reports on social-economic and geopolitical topics in Somalia, interviews top Al-Shabaab leaders and defectors as part of his new program; Investigative Dossier, which airs on VOA every Tuesday.

Among others, the Dossier has exposed several weak links in the fight against Al-Shabaab, putting on notice several government bureaucrats believed to be sympathetic to the Al-Qaida linked group.

Federation of Somali Journalists condemned NISA, terming the approach as "smear campaign" to "discredit" Maruf"s investigations which can be used to "crack the puzzle" on what ails Somalia's security department.

For Abshir Mohamed, Jubaland's Chief of Staff, the acts by NISA were "attempts to gag the most objective and respected journalist". "They are probably threatening and harassing him because they couldn’t buy him," he added.

Maruf is also the co-author of Inside Al-Shabaab; Secret history of Al-Qaida's ally, which is one of the most selling security-related publications around the globe. He has also won many awards.

Ironically, Mr. Yasin, the man behind Maruf's current predicaments, is a former reporter with Al-Jazeera. Before being recruited to the powerful agency by President Mohamed Abdullahi Farmajo, he interviewed many high ranking Al-Shabaab militants.

A reporter issued by Amnesty International in February dubbed "we live in perpetual fear", linked NISA to intimidations, harassment, bribery, and murder targeting journalists in Somalia.

In the political arena, Yasin is also linked to crackdown against federal states and opposition leaders in Somalia, a claim he vehemently denies. He's been mentioned in unscrupulous deals including plotting to bribe a Darwin soldier to overthrow Jubaland leader Ahmed Madobe.

Al-Shabaab militants have caused havoc within East Africa, but have significantly lost their bases to SNA, AMISOM and a contingent of US troops. Recently, their lost Janaale town to the government troops in Lower Shebelle.