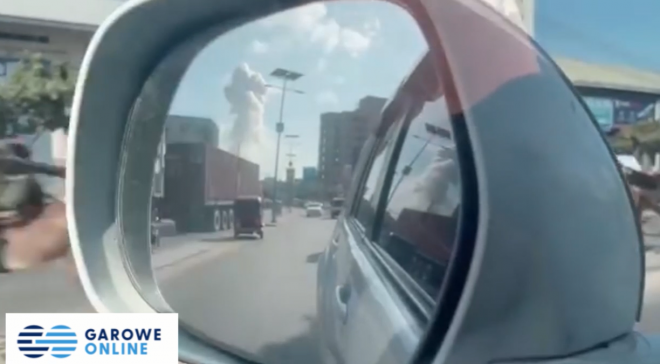 Reports indicate that the suicide bomber detonated an explosive material at the busy Banadir junction in Mogadishu where the military convoy of AU forces was passing by at the time of the unfortunate incident.

Preliminary reports indicate that two civilians died on the spot while scores of others were injured. The injured person has been rushed to nearby hospitals for emergency treatment, multiple reports indicate.

The convoy, sources said, had just left Villa Baidoa in the outskirts of the capital Mogadishu. There is a Somali National Army [SNA] Base within the vicinity of the area where the explosion took place.

AMISOM troops based in Mogadishu work closely with the SNA soldiers in the fight against Al-Shabaab. At times, the Somali troops get sophisticated training from the AU forces, which have been keeping peace in Somalia for over a decade.

At the time Garowe Online was going on air, no group has taken responsibility for the latest attack. However, Al-Shabaab militants are known for such attacks, mostly targeting security forces, government officials, and innocent civilians.

The AU forces have been assisting Somali National Army in the fight against Al-Shabaab and have often been targeted by the militants. The militants control large swathes of rural central and southern Somalia.

The explosion comes at the time the AU peace committee is meeting the Somali government over the future of AMISOM in the country. Somalia said it's ready to negotiate with AU over the proposal to have a joint mission with United Nations in Somalia.