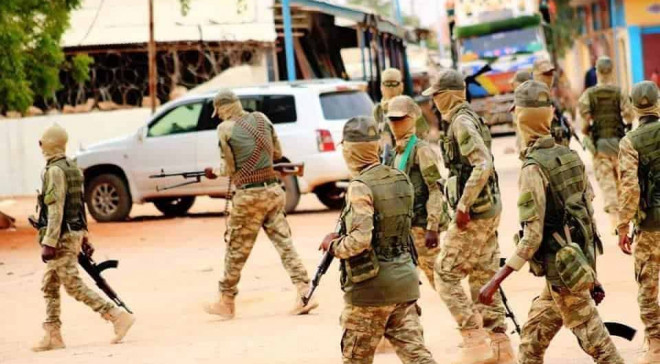 MOGADISHU, Somalia - A contingent of the Somali National Army [SNA] has been deployed in the capital Mogadishu, amid simmering political tensions which were triggered by the decision of the Lower House to extend President Mohamed Abdullahi Farmajo's term illegally this month.

The Lower House team gave the government two more years amid pressure from the opposition and members of the international community. Farmajo has since accepted the extension after his term elapsed on February 8.

Multiple sources intimated to Garowe Online that the troops left their bases in Middle Shabelle and entered Mogadishu as tensions continue to escalate. FGS put troops on high alert and closing some of the main roads leading to the presidential palace.

It has been established that the troops are under the command of Col. Saney Abdulle with reports indicating that they are against the decision by the Lower House to extend the term of outgoing President Mohamed Abdullahi Farmajo.

The Somali National Army Chief Gen Odowa Yusuf Rageh and Hirshabelle leader Ali Guldilawe are said to have tried to persuade the troops to return to their camps but the attempts failed. The SNA chief has been trying to stamp authority on his troops.

In response, Villa Somalia has deployed troops to key junctions in the city. It's not clear what step SNA troops are going to take amid escalating tensions in the capital and a possible mutiny within the fragile army.

According to reports, Col. Saney is currently positioned in Karan District, the northern part of the city, with the SNA Commander Odowa making efforts to redeploy the Col. back to their original bases, Hir-Shabelle, a state under constant threat of Al-Shabaab.

Gen. Sadik John still holds control of the Shirkoole neighborhood and dug trenches so as to avoid attacks by Villa Somalia. Sadik was dismissed as the Banadir police boss after he ordered MPs not to hold sitting on term extension.

Residents in Yaqshid district, north of Mogadishu say they saw troops and military vehicles at the Fagah junction and are spreading to new areas in the capital.

Meanwhile, the main roads of the city are still under making it difficult for the people to carry on with their daily basis and shop as Eid looms. But It's likely that the officers could clash with those loyal to Farmajo since they are against his term extension.