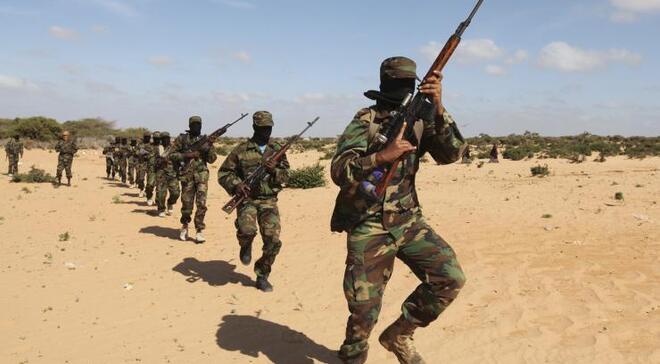 MOGADISHU, Somalia - A top Al-Shabaab commander was on Saturday killed in Somalia following a covert operation by the Danab Special Forces, officials said, in yet another achievement which showcases the ability of the Somali National Army [SNA] ahead of the much-anticipated exit of African Union Mission Forces from Somalia.

Abdirahman Abdalla alias Abu Ayman, who serves as the Financial Controller of Al-Shabaab within Afgoye, about 30 kilometers North West of Mogadishu, was downed by the military during the operation on Saturday morning and is said to have died on spot according to officials.

His bodyguards were also killed during the operation which was waged between Afgoye and Bal'ad towns in the country, which have been witnessing military crackdown against the militants. He becomes the latest Al-Shabaab commander to die within Somalia after the recent death of Abdulkadir Commandos.

Military officials and the troops have been pitching tent within the region following an ambush last week which left over 18 soldiers dead. The Al-Shabaab militants were said to be running away from Bal'ad when the incident occurred, and the military managed to kill 61 of them before being overpowered.

Abdalla is said to have been controlling finances, mostly obtained from forceful taxation of people within the country in the name of Zakat. He had been under the surveillance of security forces, officials said in a statement, terming his death as "significant gain" in the country's quest to defeat Al-Shabaab.

The SNA officers have been working hard to eliminate Al-Shabaab from the country but their efforts have often been met with resistance. The Al-Shabaab still controls large swathes of rural central and southern Somalia, but they have ceded strategic towns following the most recent operations.

Somalia is fighting hard to stabilize the following decades of internal conflicts coupled with Al-Shabaab's unending threat. The group is keen to topple the fragile UN-backed Somalia administration and is keen to impose the draconian and punitive Sharia Law.