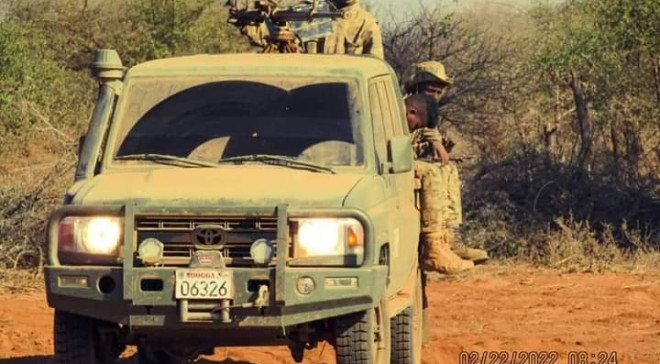 MOGADISHU, Somalia - A top commander was among dozens of Al-Shabaab terrorists killed on Tuesday following operations carried out by the Danab Special Forces, an elite squad within the Somali National Army [SNA], and their partners from the US Africa Command.

State media reported that the operation in Central Somalia so a number of villages including tax offices used by the militants being destroyed, in an operation which comes amid heightened Al-Shabaab attacks within the country.

This operation comes days after US Africa Command head Gen Stephen Townsen visited Baled-dogle airbase and another forward operating base [FOB] near Kismayo. If confirmed by the US Africa Command, it will be the first time in as many months the US is helping Somalia's military in an operation.

The operation was carried out within Fiidow village in the Hiran region with state media terming it as "planned". Besides the top commander whose name is yet to be revealed due to verification processes, five other top leaders were killed in the operation.

"Over 60 Alshabab terrorists were killed in a planned security operation conducted by Somali National Army with support of airstrikes of Somalia’s security partners in Fiidow village of Hiiraan region on Tuesday, "SNA chief Gen. Odowaa Yusuf confirmed to State Media.

Al-Shabaab militants have been carrying out attacks against senior government officials, security forces, and innocent civilians across the country in recent weeks. For instance, the militants carried out bomb attacks in and outside Bossaso, the commercial capital of Puntland over the weekend, killing a total of six people.

At Beletwyene in Central Somalia, the militants killed over 13 people following a bomb blast that targeted a tea shop. The incidents have been condemned globally, with allies vowing to support the country effectively fighting terrorism.

The United States had withdrawn its forces from the Horn of Africa nation but there are plans to reinstate them. But despite the withdrawal, the army has been working closely with Danab Special Forces for training and air surveillance during operations.