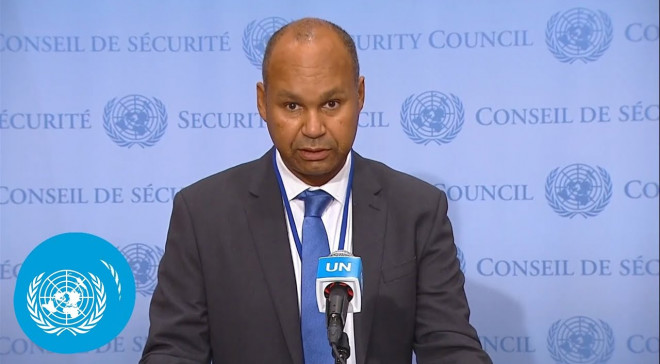 NEW YORK - The United Kingdom [UK] now says the Somali National Army [SNA] should be taking over security responsibilities in the coming months, adding that the move will help stabilize the country, which has been struggling with instability for the last three decades.

The SNA Force is still under supervision from the African Union Transition Mission [ATMIS] forces and other partners who have been critical in rebuilding the once celebrated national army. ATMIS is set to hand over responsibilities in the next couple of months.

"Turning to security, we thank ATMIS for providing security support throughout the elections and condemn Al-Shabaab’s persistent attempts to disrupt the process. We send our condolences to those affected by the Al-Shabaab terrorist attack on the Burundi ATMIS contingent on 3 May," said ambassador James Kairuki.

The UK said the new administration of President Hassan Sheikh Mohamud should ensure political agreements and national issues, adding that the move will boost transition in the country upon the exit of peacekeepers and other stakeholders.

"The ongoing threat posed by Al-Shabaab highlights the need for the new government to secure broad-based political agreement on a national security architecture that is effective, affordable, and which facilitates the sustainable transition to Somali-led security while maintaining pressure on Al-Shabaab," he said. "The United Kingdom will continue to work with Somalia’s Federal Government and the Federal Member States, and alongside other international partners, to achieve this."

The UK has been supporting the training of the Somali National Army at Baidoa in the Southwest for the last couple of years and has been integral in pushing for humanitarian assistance in the country. Recently, the UK Minister for Africa Vicky Ford confirmed that London donated $31 million to the country which is also struggling with drought.

"Madam President, as we’ve heard, the impact of the drought is alarming. It’s increasingly likely that Somalia will face famine, despite our collective commitment that this would never happen again," he said. "More funds and collective action are needed if we are to prevent famine in Somalia. The UK Minister for Africa announced an additional $31 million in response to the humanitarian crisis in Somalia, on top of the $25 million already committed this year."