UN calls for elimination of sexual violence in Somalia 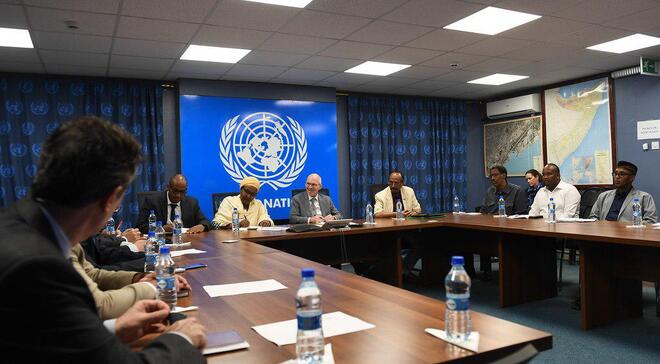 MOGADISHU, Somalia - The United Nations [UN] Mission in Somalia [UNSOM] has called for the elimination of sexual violence, which has been a major crisis throughout the political, inter-clan conflicts and terrorism in the war-torn nation, adding that collective measures are fundamental in succeeding in the mission.

James Swan, the UN envoy to Somalia, seized the International Day for Elimination of Sexual Violence to call for leaders, communities, and partners to assist victims and survivors of the predicament, adding that their plight should be taken seriously.

According to him, Somalis should stand in solidarity with the victims, arguing that persistent encouragement would help curb such cases in the future. He paid tribute to those taking on the challenging and often dangerous work to prevent such violence.

The violence meted against women is common in Somalia, a country which has struggled with stability for decades, with perpetrators being civilians, local security forces and foreign troops working in the country, according to a series of reports collated in recent years.

But they have often escaped punishment due to the absence of concrete laws on sexual violence, thus creating a loophole for subsequent violations. Parliament is yet to enact the Sexual Offences Act, which has been pending in the house for months now.

The country recorded almost 744 cases of rape in 2019 and of this number, 241 were confirmed as conflict-related sexual violence-related cases targeting women and girls, mostly in both government-controlled and Al-Shabaab strongholds.

However, the UN said in a statement, the vast majority of survivors of conflict-related sexual violence do not report such violence due to fear and cultural stigma, and therefore, it remains an under-reported crime.

In Somalia, some 3,000 victims and survivors of sexual assault and gender-based violence, including CRSV, received medical and health assistance last year, and some 5,700 received psychological assistance.

“Conflict-related sexual violence inflicts deep personal wounds and remains a violation of the human rights of the victims. It also scars the fabric of society and the country and has no place in the modern, emerging Somalia," Swan said in a statement, Friday.

Already, a direct outcome of the COVID-19 pandemic in Somalia has been an increased burden on health services and first responders, potentially increasing the risk to service providers and victims and survivors of CRSV.

In addition, Swan added, COVID-19 has had a detrimental impact on aspects of the rule of law, including access to justice, with the reporting of crimes made more difficult. For example, Somalia’s Attorney-General’s Office has said that the suspension of court work during the pandemic has resulted in zero convictions for sexual crimes since April.

The UN envoy emphasized that “those working on CRSV deserve continuing support from national and international partners to ensure the resources needed are available to fight CRSV, and appropriate CRSV measures are integrated into the COVID-19 response.”

Early this year, Somali National Army [SNA] troops were linked to despicable acts of rape within Baidoa and Janaale where a total of four women were raped simultaneously. The ministry of defense confirmed the cases and vowed to investigate them expeditiously.

At Baidoa, one of the victims died on spot after several hours of the rape. A Voice of America local correspondent was arrested after trying to make an enquiry, but would later be released after a series of protests from locals and international actors.

In Afgoye, two children from the same family were tied and raped by unknown men but authorities have since arrested 18 men for prosecution. Such cases have often dragged in court due to the absence of a proper law for prosecution.

But in the federal state of Puntland, perpetrators of sexual violence have often faced a firing squad after rounds of a court battle. Two men were executed early this year after being convicted of raping and killing a girl at Galkayo town.