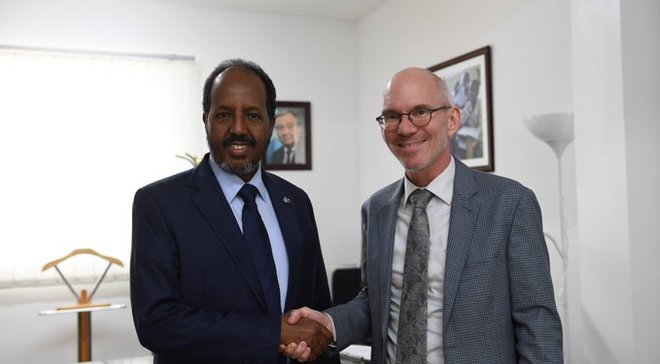 During a meeting in Mogadishu on Monday, the UN’s envoy for Somalia and former President Hassan Sheikh discussed ranging from next year’s elections to the importance of political space and greater inclusion.

Somalia’s current Federal Government pledged it will hold one person, one vote election in 2020-2021, but the political parties have already expressed doubt about the plan due to the security challenges.

Briefing the UN Security Council on the Somalia situation last month, Swan underscored the need to forge political consensus in the country to realize what he described as the “ambitious agenda for 2020”.

The envoy’s meeting with Mohamud came weeks after talks between the Forum for National Parties [FNP] and President Farmajo at Villa Somalia over the political standoff between the FGS and opposition.

FNP under the leadership of another former President Sharif Sheikh Ahmed said in a statement that meeting with Farmajo focused on several issues, including timely, free and fair elections in 2020/21.

The opposition team has been accusing Federal Government of suppression, misuse of the power, violating the constitution, plotting illegal term extension and lack of commitment in the Al-Shabaab war.

The United Nations is pushing for the winner-takes-all model of the election, arguing that 'it will reduce electoral chaos and divisiveness'.

A Parliamentary ad-hoc committee on election laws released a report last month in which Somalis rejected the proportional representation model which had been recommended by the cabinet.

The cabinet recommendations would lead to the loss of power-sharing and would make it difficult to hold elections, the report said.