US airstrikes kill Al-Shabaab militant, wounds two others in Somalia 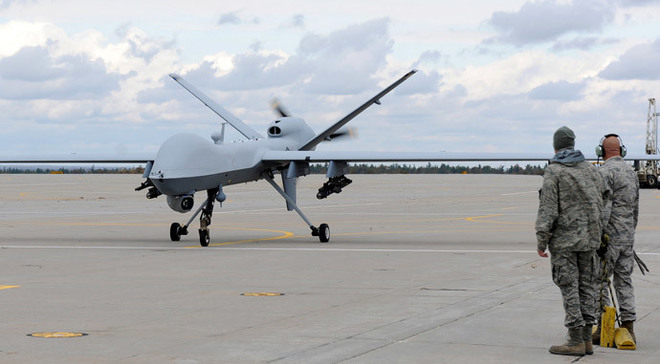 MOGADISHU, Somalia - One Al-Shabaab militant was on Thursday killed within the vicinity of Jilib town with two others badly wounded, AFRICOM has said, in the latest offensive against the insurgents.

Thursday's airstrikes come amid bolstered efforts to crush the militants, who have caused havoc in Somalia, with an aim of toppling fragile UN-backed administration.

Since January, the US has launched 10 airstrikes targeting Al-Shabaab militants in Southern Somalia, the single highest within the same period in previous years.

In total, the US military mounted 63 airstrikes in 2019, killing dozens of militants in the process, AFRICOM had said.

For the second time in a row, the US military targeted Al-Shabaab compound within Jilib town, the headquarters of the Al-Qaida associated group.

Jilib has traditionally been used as the training base for the militants, who lost grip at the Somalia capital Mogadishu, which they had seized before.

Despite retreating to remote villages, the SNA and allied forces have launched a massive crackdown, including the latest onslaught on Thursday.

"Initial assessments conclude one al-Shabaab facility was severely degraded, and two al-Shabaab terrorists were wounded as a result of these two airstrikes," AFRICOM said.

However, the identity of the militants is yet to be established but their compound as also dismembered by the military, officials said.

Civilians spared in the attack

For the umpteenth time, the US military denied any civilian casualties, following a subsequent assessment carried in the town, officials read.

AFRICOM said in a statement: We currently assess no civilians were injured or killed as a result of these airstrikes".

Human Rights teams have been accusing the US military of "doing too little" to protect civilians from "unprecedented" deaths.

Why the airstrikes are important

While the US has deployed over 500 troops in Somalia, most of them only offer aerial support besides logistical training.

“Airstrikes are one way we help prevent al-Shabaab from building a safe haven to plan deadly attacks against the U.S. homeland and East African partners,” he said.

Stephen Townsend, the AFRICOM commander, had previously accused Al-Shabaab of "using propaganda to lie to the public for selfish gains".

Last month, Al-Shabaab raided a US Naval Base in Kenya, leaving three Americans dead. The military is still pursuing the militants.

While addressing US Senate, Townsend said: "they caught us unprepared but we are investigating the incident and we shall act accordingly".

The US committed to crushing the militants

To foster peace and stability in Somalia, the US has pledged to work with the local forces by enhancing them with capacity building.

Al-Shabaab’s network indiscriminately commits acts of violence and is responsible for the deaths of innocent Africans, the US adds.

U.S. Africa Command will continue to work with its partners to transfer the responsibility for long-term security in Somalia, the statement read.