US Ambassador to Somalia holds key talks with country’s PM 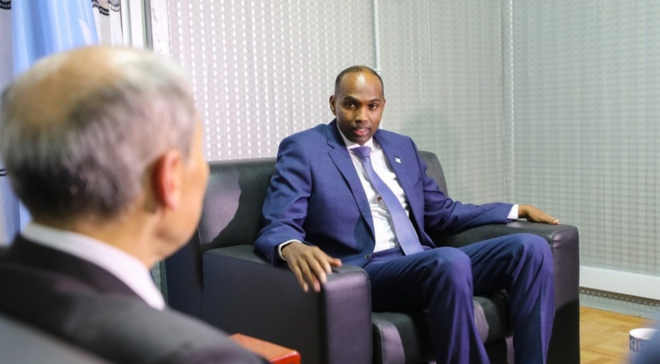 The U.S. Embassy has confirmed the meeting through a Twitter post, saying the premier and Yamamoto discussed key issues, including Somalia’s ongoing progress towards peace, stability, and prosperity.

The United States mission in Mogadishu said Partnership between the Federal Government of Somalia [FGS], all Federal Member States, and international partners are key for the re-emergence of a new and stronger.

Ambassador Yamamoto reinforced that degrading the Al-Qaeda’s most powerful allay in East Africa, Al-Shabab and providing stabilization efforts for all Somalis are a top priority of the U.S. in the country.

Underlining that the entire region would benefit from peace and stability in Somalia, he added that it would allow Somalis to "better focus on building a prosperous future."

The U.S. is pouring millions into Somalia despite concerns over who will benefit from the grand financial aid.

Trump’s administration provides support to Somalia in the decades-long war against Al-Shabaab and authorized the U.S. military to broaden airstrikes against the militant groups to defend America’s interest.

The U.S. backing helped Somali National Security Forces and their partners continue to make incursions into territory previously controlled by Al-Shabaab, pushing the militants out of key areas in Lower Shabelle region this year.

The Horn of Africa nation is now facing emergency levels of hunger, with millions of people experiencing life-threatening food insecurity and requiring immediate food assistance as floods hit the country.

The al-Shabaab operating in Somalia has carried out numerous attacks in Somalia, with being blamed for the country's worst terrorist attack, the Oct. 14 Mogadishu truck bombing which killed at least 587 people and injured 316.