US ambassador to Somalia under fire for endorsing contentious election 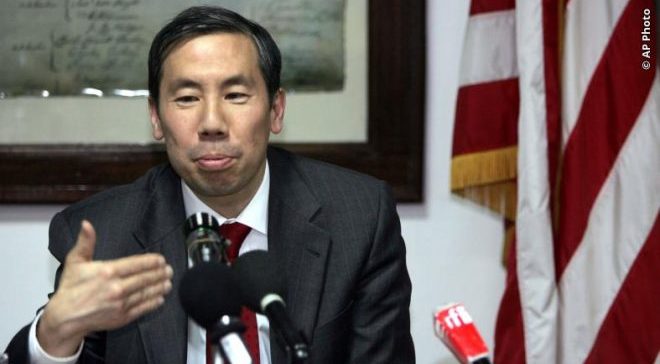 Donald Yamamoto, the US ambassador to the troubled Horn of Africa nation, was quick to back the outcome, despite endless disputes among local politicians.

Sufi group ASWJ, which also controls a sizeable support base in Galmadug, had earlier installed its own president, further worsening the situation.

Villa Somalia was widely dragged to the state's election, which opposition had termed "null and void" because "it lacks inclusivity".

But the US, which is among key stakeholders in the stabilization process of Somalia, was quick to back the results amid bitter disputes.

Donald Yamamoto, the US Ambassador to Somalia, had earlier warned against "violence and intimidation" when the lawmakers gathered to pick a new leader.

"It is the responsibility of everyone to avoid the threat and or use of violence," US said. "To that end, we congratulate the newly elected President of Galmudug State, Ahmed Abdi."

Mr. Abdi was widely linking to President Mohamed Farmajo, who is preparing to defend his seat in December and has been calling shots in some states.

Yamamoto blamed for bulldozing the process

But in a statement, Forum for National Parties [FNP], an opposition outfit, accused Yamamoto of "endorsing fraud" in Somalia following the polls.

FNP comprises of six political parties under former Presidents Sharif Sheikh Ahmed and Hassan Sheikh Mohamud, who have been critical of Farmajo's administration.

By doing so, FNP added, "he surrendered his privilege as an honest and impartial diplomat, who is pushing for dialogue in Somalia"

Prior to the polls, FNP had called for dialogue following suspicions among top players, including within the elections board.

"Yamamoto's position contradicts the core principles of good governance and promotion of democracy that are key pillars of US foreign policy," the statement read in part.

The opposition group also accused Farmajo of allegedly undermining regional governments, throughout his reign since 2017.

Events at Dhusamareb are a manifestation of the federal government's dismal records in organizing elections that inspire the trust of stakeholders, it observed.

Farmajo, they said, "is keen to take over member states for the sole purpose of predetermining the outcome of next elections in December."

Without dialogue, the group said, Al-Shabaab militants will find a safe haven to expand their criminal activities with an aim to destabilize the region.

While the US was categorically clear about the way forward, their economic competitors China were a bit cautious after all.

China, another superpower, acknowledged Abdi's victory but was quick to rule out "interfering" which Galmadug's internal processes.

"Without any intention of interfering with the internal affairs of brotherly Somalia, we would like to congratulate H.E. Ahmed Abdi Kariye on his election as President of Galmudu," China said.

The Communist state called for dialogue, arguing that it's important for the purpose of "unity and stability" of Galmadug.

China said: "We commend his commitment to promoting dialogue and reconciliation for a unified and stable Galmudug."

The US and Chinese endorsement of the regional elections comes as UN, AU, EU, UK remained silent on the outcome of the Galmudug polls and election of the new president after ambassador Yamamoto faced stiff condemnations for his support.

How legislators voted on Sunday

Of the 89 lawmakers, only 77 participated in the process, which was boycotted by key contestants and opposition leaders.

According to the results announced by the regional electoral body, Qoorqoor garnered 66 votes out of 77 votes.

Also, the Sufi group ASWJ, which had been allocated 20 seats in the regional assembly, withdrew from the race, accusing Farmajo of sponsoring Mr. Abdi.

Mr. Ahmed Abdi is said to be reaching out to critics, as he mulls possible coalitions to avoid further political fallout in the region.