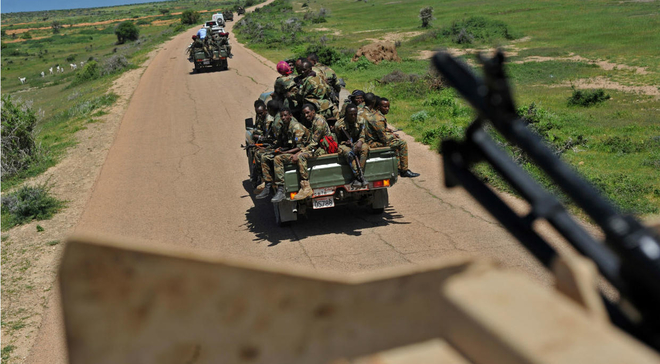 MOGADISHU, Somalia — The U.S. military on Friday said it has carried out its first airstrike in Somalia in 2020, killing 3 Al-Shabab militants after a “large group” mounted an attack on Somali forces, Garowe Online reports.

The United States Africa Command said in a statement that the airstrike occurred near Bacaw area located on the outskirts of Afgoye town in Lower Shabelle region, 30Km southwest of Mogadishu.

AFRICOM, which oversees American military operations in the continent did not say whether any Somali special forces Danab soldiers were killed or wounded by Al-Shabaab fighters during the attack on Friday.

“In coordination with the Somali Government, U.S. Africa Command conducted an airstrike against al-Shabaab terrorists who engaged Somali National Army partner forces on patrol near Bacaw on Jan. 3,” read the statement.

The U.S. military said it assessed no civilians were injured or killed as a result of this airstrike.

Dozens of Somali civilians have been killed or injured by US army airstrikes in Somalia, after being wrongly targeted as “al-Shabaab terrorists”, according to a report released by Amnesty International last year.

The human rights group’s latest investigation found that 3 men killed in an airstrike in March were civilian farmers with no association with the militant group. Between them, the three men left behind 19 children, according to Amnesty.

It added that the Pentagon is not adequately investigating potential casualties.

The United States has dramatically stepped up airstrikes against Al-Shabaab since President Trump took office, carrying out at least 63 such strikes last year. Some have targeted group’s top leaders or key financial officials.

There are 500 to 600 US troops in Somalia currently who are helping Somali and AU troops in the fight against Al-Shabaab, which is trying to oust the UN-backed weak Federal Government in Mogadishu.

Al-Shabaab controls large parts of rural southern and central Somalia and continues to carry out high-profile suicide bombings and other attacks in the capital, Mogadishu, and elsewhere.

The Al-Qaeda-affiliated group claimed responsibility for the deadly attacks on luxury hotels, Government buildings and street bombings in the Somali capital, Mogadishu and neighboring Kenya, killings hundreds in the past years.