US military to train Danab Brigade until 2027 in Somalia 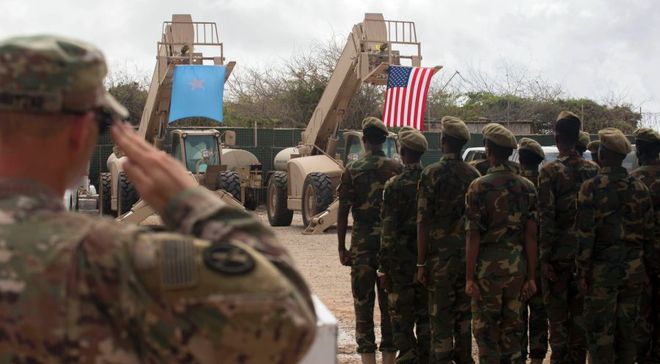 MOGADISHU, Somalia - The much-anticipated exit of foreign forces from Somalia could be significantly delayed, details have emerged, amid ongoing efforts to build a functional army for sustainability.

Since the ouster of dictator Siad Barre, Somalia has remained without a functional government for three decades, even though there have been efforts to support one.

While AMISOM has tentatively scheduled 2021 for a complete exit, the US could stay a little bit longer, with training and equipping Somali he special Danab Infantry Brigade being one of long-term strategy, Military Times reported.

The US-trained Danab troops offer VIP protection besides helping in strategic take over of important towns in Somalia from Al-Shabaab militants, who have caused havoc for over a decade now.

For instance, working in collaboration with Turkish-trained Gorgor troops, Danab forces managed to flush out Al-Shabaab from the agricultural town of Janaale on Monday, officials said.

Although there are plans by Pentagon to scale down troops in Africa, the US Africa Command is keen to train the "Lightening Brigade" until 2027, almost a decade after Washington first got involved directly in training the infantry for the fight against Al-Shabaab.

Statistics unveiled by AFRICOM shows that currently, there are about 7,000 active Al-Shabaab fighters in East Africa. However, they have used remote villages for recruitment and training, after losing grounds in the capital, Mogadishu.

“I think our engagement on a day-to-day basis with the Danab soldiers is very helpful for them to get the experience and see the professionalism of our forces."

Besides toppling Al-Shabaab's leadership in strategic towns, the forces managed to repulse a would-be deadly attack in September last year at Ballidogle army base, which they jointly use with American troops.

Since the Danab was first formed in 2013, the force has expanded from approximately 150 personnel to between 800 to 1,000 troops. Ultimately, the goal is to build up a force of 3,000 Danab troops, Castellanos said.

The personnel is then handed over to U.S. military advisers for additional training in advanced warfighting techniques, among other things. AFRICOM did not disclose which military units are in Somalia training the Danab, citing force protection considerations.

More often than not, the forces work alongside the US military when launching drone strikes, and are usually reliable when giving ground reinforcement against the Al-Shabaab militants.

After years of training with U.S. troops, the Danab forces now are conducting most missions on their own, according to Castellanos.

Currently, there are close to 500 US troops in Somalia, which is a fraction of the estimated 8,000 troops across Africa. Gen. Stephen Townsend is in charge of the forces in Africa.

Although staying a little longer may not be objectionable, the US could be dragged into internal wrangles in Somalia, which have seen the opposition accuse the SNA troops of being "used for political purposes".

Abdirahman Abdishakur Warsame, the leader of the Wadajir party, for instance, on Monday lauded the Danab forces for taking over Janaale but warned that "it's time they serve the public and not political interests" of President Mohamed Abdullahi Farmajo.

In December, Somalia is expected to hold the first universal suffrage polls, thus the keen interest of international partners, who have been supporting the war-torn nation for decades.