US offers training as Somalia fights for security 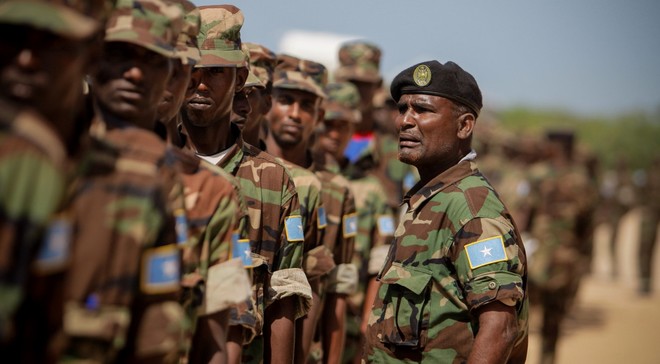 The U.S. and the African Union agree that the time for Somalis to take over security responsibility in their country is swiftly approaching.

During a conference call organized by U.S. Africa Command in Stuttgart, Germany, General Thomas Waldhauser, Commander of AFRICOM, said the recent announcement that the U.S. will send 40 troops to Somalia does not signal a change in strategy. The U.S. will play a support role training the Somali National Army to create efficient logistics networks to supply their troops.

“This is part of a routine deployment that has been really in the works for quite some time,” Waldhauser said.

Somalia and its international partners are working to train a 28,000-person national army after more than two decades of civil war and turmoil. The terror group al-Shabab still controls an estimated 10 percent of the country and conducts regular attacks against military and civilian targets. Somalia relies largely on the 22,000-person African Union Mission in Somalia (AMISOM) for its security.

“Our goal from the United States' perspective, in conjunction with our partners who are there doing the training, is that the Somali National Security Forces will be prepared to provide for their own security sometime in the 2020/21 timeframe when the next series of elections go,” Waldhauser said. “We all have to pull together to make sure that we're very effective and efficient in the training now.”

Ambassador Francisco Madeira, the civilian head of AMISOM, said the AU intends to begin drawing down its forces in 2018.

"We were not intending to stay there forever," he said. "Somalia is for the Somalis. We, like all other Africans, we have our own countries."

Prospects for peace in Somalia were aided by a peaceful 2017 election and a smooth transfer of power to new President Mohamed Abdullahi Mohamed. Madeira believes setting a timeline for withdrawal will allow the new Somali government to strengthen its institutions to face the continued terror threat as well as address internal clan divisions.

“We are in solidarity with the Somali people, we need to support Somali people. We have interests to have a stable Somalia,” Madeira said. “But surely, the Somalis, the country, can only be best defended by the Somalis themselves, who understand better their dynamics, their reality and their priorities and their objectives.”

In early April, President Mohamed announced that he would offer amnesty to members of al-Shabab who renounce extremism and agree to undergo demobilization and reintegration training. Mohamed declared war on all extremists who rejected the offer.

“President Farmajo just announced an amnesty toward the elements of Al-Shabaab who have joined that organization for other different reasons. And he has opened his hands. But you will have to be clear. Those who still want to persist in their evil activities and violent activities against the people of Somalia and against the government of Somalia, these ones will have to be confronted by the force of arms,” Soubagleh said.