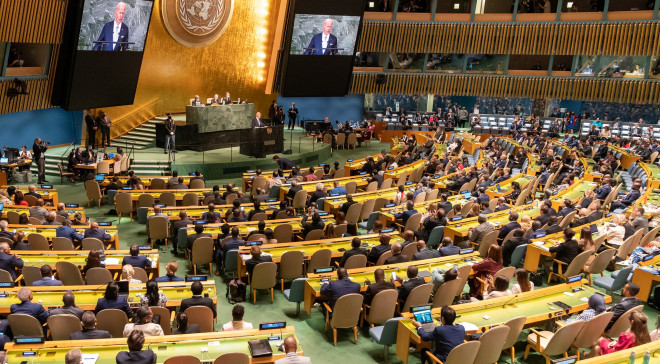 UNITED NATIONS -- Political leaders on Thursday highlighted the impact of climate change and called for collective action in their speeches at the General Debate of the UN General Assembly.

Niger's President Mohamed Bazoum said in his speech that the African continent is being exposed to worsening food insecurity, displacement of populations, recurring droughts, and pressure on water resources due to climate disruption.

The deterioration of the security situation in the Sahel is partly attributable to climate change, he said.

Instability and lawlessness made the vast territory in southern Libya a platform for transnational organized crime, "where we see a blossoming of trafficking in arms, drugs, fuels, and migrants," he noted.

As climate change threatens the practice of pastoral farming, violence is on the rise among young shepherds, and many have turned to terrorism, he said.

"Somalia is caught between floods and droughts annually, owing to climate change and poor infrastructure. Our people, who have a long tradition of living harmoniously with nature and barely contributing to poisonous emissions warming the Earth, are the ones who are paying with their lives today," he told the General Assembly.

"We know that climate change is real, and we are living with the evidence of its painful and destructive reality today. We also know that Somalia, and the rest of the world, cannot develop sustainably without the global climate crisis being jointly addressed quickly and effectively," said the president.

"In the long term, we must collectively work together to ensure that we mitigate the acceleration of the dangerous and costly climate crisis by meeting the commitment to invest in and adequately finance climate adaptation in the most affected and vulnerable regions of the world, including sub-Saharan Africa," he said.

SIDS "is always mindful that despite our best efforts to improve our financial management and debt sustainability, a single climate event could wipe out 100 percent of our economy in a few hours," he said at the General Debate.

"Concerted action to slow down and halt global temperature rise is literally a question of our survival. While we will continue to develop our own resilience and play our part in mitigating climate change, we cannot, by our action alone, change the trajectory," said Holness.

Jamaica looks forward to the UN Climate Change Conference in Egypt (COP27) later this year. It calls on all countries to meet their commitments and contributions to climate targets and developed nations to increase their commitments to climate financing, particularly for adaptation and loss and damage.

SIDS and some middle-income countries have a particular vulnerability to climate shocks and external economic shocks, which have an oversized impact on their national budgets and infrastructure, he said.

Jamaica believes that a comprehensive and targeted approach to accessing development finance is needed, he said. "We eagerly anticipate an era of truly equitable access to concessional financing and other funding support, which will enable us to invest in resilient infrastructure and create fiscal buffers so that we can withstand and recover quickly from the next economic, health or climate shock with little borrowing."

Without acknowledging such vulnerabilities, SIDS will continue to struggle and be unable to achieve the Sustainable Development Goals, he warned.

"COP27 must demonstrate that the world is making progress on all pillars of the Paris Agreement. We urgently need to address loss and damage in a meaningful and credible way," he said.

Loss and damage are happening now -- at 1.1 degrees of warming. The floods in Pakistan have inundated a third of the country, he said. "We can only imagine the fate of small islands if we go beyond 1.5 degrees. Two degrees of warming is unthinkable and must be avoided at all costs."

He called for a targeted, ambitious global response beyond adaptation measures, including how to finance loss and damage.

"Polluters must pay. At the same time, we need to resolve access to finance. Grants and concessional financing currently fail to account for your islands' unique vulnerabilities," he said.

The United Nations will push for more ambition and climate action by all, especially the Group of 20, which account for 80 percent of global emissions.

He said that the UN would continue to call for a renewables revolution and for developed countries to provide developing countries with the finance and technology they need to transition to a net-zero and climate-resilient future. 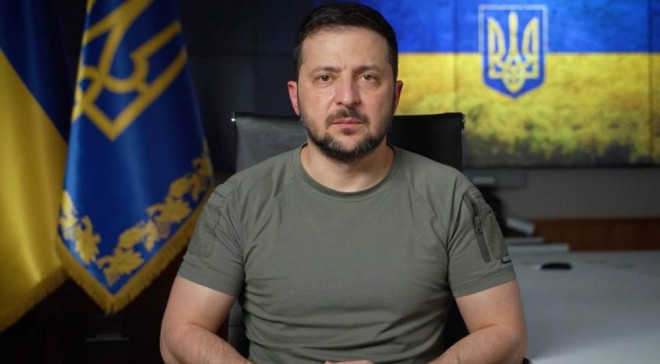 The United States has warned parties that may try to violate the deal which was signed in Pretoria and Nairobi.

Somalia, South Sudan and Kenya to benefit from Ukraine grain

US Congresswoman IIhan Omar refutes claims she is on Qatar's payroll