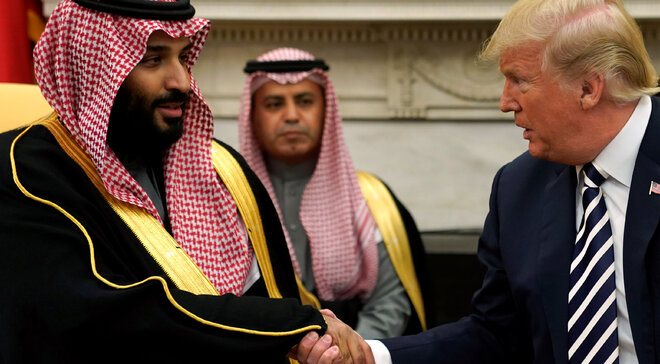 RIYADH - Saudi Arabia, which may have more to lose from Joe Biden’s U.S. election victory than other Arab states, has taken its time to comment after the defeat of Donald Trump whose Middle East policies and staunch opposition to Iran had Riyadh’s backing.

As other Arab states raced to congratulate the Democrat challenger, the kingdom’s de facto ruler Crown Prince Mohammed bin Salman remained silent on the U.S. vote for hours even as he sent warm words to the president of Tanzania on his re-election.

Prince Mohammed’s close personal ties with Trump had provided a vital buffer against a tide of international criticism over Riyadh’s rights record sparked by the murder of Saudi journalist Jamal Khashoggi, Riyadh’s role in Yemen’s war, and the detention of women activists.

Those areas may now become points of friction between Biden and Saudi Arabia, a major oil exporter and buyer of U.S. arms.

The former U.S. vice president pledged in his campaign to reassess ties with the kingdom, demanding more accountability over Khashoggi’s killing in Riyadh’s Istanbul consulate and calling for an end to U.S. support for the Yemen war.

“The only thing worse than COVID-19 would be BIDEN-20,” wrote Saudi Twitter user Dr. Muna, while many other Saudi users of the social media platform simply ignored the result in the initial hours after the U.S. networks called the election for Biden.

A Saudi political source played down the risk of a falling out between the kingdom and the United States, pointing to Riyadh’s historic ties with Washington.

But Saudi Arabia’s Okaz newspaper offered a sense of uncertainty about how the future plays out for the kingdom. “The region is waiting ... and preparing ... for what happens after Biden’s victory,” it wrote in a front-page article.

The kingdom may not have to wait long. Neil Quilliam, an associate fellow at Britain’s Chatham House think-tank, said the Biden administration would likely seek to signal early on its discontent with Saudi domestic and foreign policies.

“The Saudi leadership is concerned that a Biden administration and a hostile Congress will carry out a full review of relations, including re-evaluating defense ties and therefore will likely make positive sounds and moves towards ending the Yemen conflict,” he said.

Saudi Arabia was an enthusiastic backer of Trump’s “maximum pressure” of tough sanctions on regional rival Iran. But Biden has said he would return to a 2015 nuclear pact between world powers and Tehran, a deal negotiated when Biden was a vice president in Barack Obama’s administration.

Abu Zaid, a cashier at a supermarket in Riyadh, said he hoped Biden would take a different approach. “I am not happy with the Biden win, but I hope he learns from Obama’s mistakes and realizes that Iran is a common enemy,” he said.

A Saudi political source said the kingdom had “the ability to deal with any president because the U.S. is a country of institutions and there is a lot of institutional work between Saudi Arabia and the United States.”

“Saudi-U.S. relations are deep, sustainable, and strategic and not prone to change because a president changes,” he said.

Prince Mohammed had denied ordering Khashoggi’s killing but in 2019 he acknowledged some personal accountability by saying that it happened on his watch. Riyadh has jailed eight people for between seven and 20 years in the case.