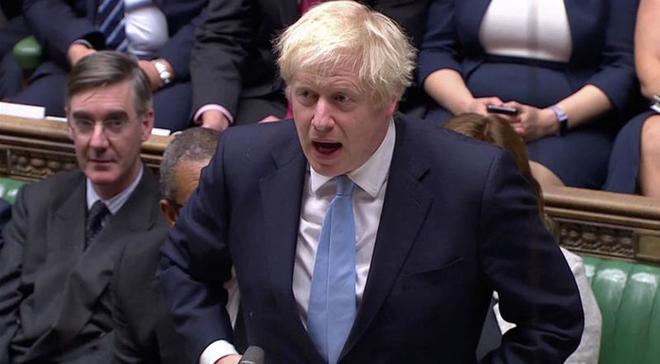 Johnson again tried and again failed, to call a snap general election in a vote that took place in the early hours of Tuesday morning, his sixth-straight defeat in five days of House of Commons business.

To trigger an early election, the government needs 434 votes - two-thirds of all MPs in the 650-seat lower house of parliament - but only 293 backed the proposal.

Expelling 21 Tory rebels last week after they supported legislation to stop a risky 'no-deal' Brexit, has left the prime minister without a parliamentary majority and unable to govern, as the deadline to leave the European Union looms. An election is expected, sooner or later.

Opening the debate at nearly 11pm (22:00 GMT), Johnson goaded Jeremy Corbyn, repeating his line that the Labour leader was "the first leader of the opposition in the history of our country to show his confidence in Her Majesty's government by declining the opportunity to have an election with a view to removing the government".

He said Corbyn had previously said he would back an election if legislation to prevent the government from forcing through a no-deal Brexit on October 31 became law, which it did on Monday afternoon.

"The 'surrender act' has now passed," said Johnson, referring to the legislation that he claims will tie his hands in securing a departure deal with the EU. "It's gained royal assent, he's done his level best to wreck this country's chances of a successful negotiation. By his own logic, he must now back an election."

Corbyn dismissed Johnson's claims. "We're eager for an election," he said. "But as keen as we are, we are not prepared to risk inflicting the disaster of no-deal on our communities."

Opposition parties united to block Johnson's bid to take the country to the polls, distrustful of the prime minister and wary of any chicanery that could see the administration change the date of the election once it was agreed and run down the clock on a "no-deal" Brexit.

"We were absolutely rock-solid on rejecting out-of-hand Boris Johnson's attempt to cut and run with a general election," the Liberal Democrats' Tom Brake told the PA news agency on Monday morning.

"There's absolutely no way we will let him do that before he's secured an extension [to the Brexit deadline, avoiding 'no-deal']. We've put in place all of the countermeasures that we think might be necessary depending on what tricks and subterfuge that Boris Johnson may still have to hand or seek to deploy."

After the losing the vote, Johnson told MPs, once again, that he was committed to taking the UK out of the EU at the end of October, but that he would "strive to get an agreement in the national interest while preparing to leave without one."

Brexit has dominated political life in the United Kingdom since the 2016 referendum, which the leave vote won with 52 percent of the vote, against 48 percent for remain.

"This government will not delay Brexit any further," he told a raucous house. "We will not allow the emphatic verdict of the referendum to be slowly suffocated by calculated paralysis."

At Johnson's request parliament has now been suspended until October 14, the longest prorogation since the 1930s.

Al Jazeera's Jonah Hull, reporting from outside parliament, said the prime minister's options were "extremely limited" and that attention would now focus on the Brussels Summit on October 17 and whether Johnson was able to secure a new deal.

"They now won't have time to have an election before October 31 because they have [suspended] parliament," Alan Wager, of the Changing Europe Initiative at King's College London, told Al Jazeera.

"Given the limited options faced by Boris Johnson, he must choose - does he resign, or does he go into an election having had to ask for an extension from the EU?

"Either way, Johnson is in a bind. Either way, he's going to be losing votes."

Nigel Farage, the far-right leader of the Brexit Party who has failed seven times to be elected to parliament, had offered Johnson an electoral pact on Monday morning, stating that "no-deal" - favoring anti-Europe Conservative candidates - would face no challenge from his own party, which has been rising in popularity.

But his support soon faded after Johnson appeared next to his Irish counterpart, Leo Varadkar, and said he was still seeking a divorce deal to ensure an "orderly" British withdrawal from the EU. Johnson said "no-deal" would be "a failure of statecraft".

"Parliament and the 'anti-no-dealers' have called Boris Johnson's bluff on parliament's suspension and a general election," Scott Lucas, professor of international politics at the University of Birmingham, told Al Jazeera.

"The European Union has called his bluff on magical 'alternative arrangements' for the Irish backstop. And now Nigel Farage is calling his bluff on a last-minute deal," he added.

"There is no way that Johnson copes with all three factions - apart from resignation and hope that he'll get back into 10 Downing Street in a coalition with the Brexit Party, as a prime minister in name if not authority."

Earlier on Monday evening, the government had lost a vote which mandated senior officials to publish formerly private WhatsApp and other messages relating to the suspension of parliament.

A motion was then brought forward by Corbyn, which mandated the government to abide by the rule of law.

The government's Lord Chancellor, Attorney General, and Solicitor General were all notable by their absence from that debate, but Foreign Secretary Dominic Raab - a former lawyer who worked with the Palestinian Liberation Organization on the Oslo Accords - spoke for the government, stating the government would "always respect the rule of law".

He added: "How the rule of law will be respected is normally straightforward, but sometimes it can be more complex because there are conflicting laws or competing legal advice."

That remark sparked ire among legal commentators, with prominent law and policy blogger David Allen Green tweeting: "This shows confusion. Yes, laws can be complex - interpretations differ, and laws can conflict - and there are mechanisms for resolving this, for example, litigation. But: the Rule of Law is not complex, indeed it is a simple principle. You comply with the law and are not above it."