US offers $10m for Hezbollah fugitive over Hariri killing 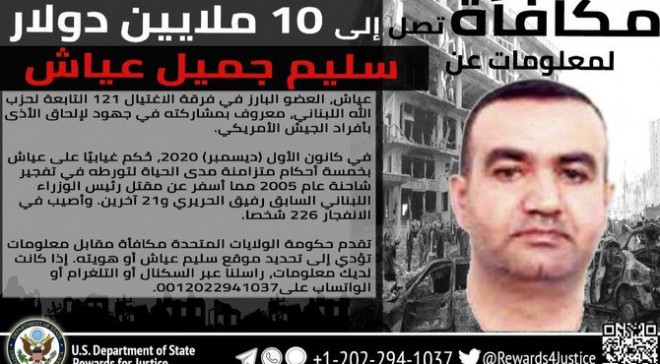 Set up by the United Nations in The Netherlands, the Special Tribunal for Lebanon in December convicted Ayyash in absentia to life in prison over the killing of Hariri in 2005.

Ayyash, 57, is believed to be in hiding in Lebanon where Hezbollah’s chief Hassan Nasrallah has refused to hand him over.

The tribunal has since said it will also try Ayyash over three other attacks on Lebanese politicians in the mid-2000s.

The State Department said that Ayyash has also plotted to harm US military personnel.

Hariri, a Sunni Muslim, was allegedly killed because he opposed Lebanon’s control by Syria, which is allied with Hezbollah, a Shiite Muslim movement backed by Iran.

The assassination sparked the Cedar Revolution which forced out Syrian troops.

The United States considers Hezbollah a terrorist group but the movement wields political power in Lebanon, holding seats in parliament.

In an interview with Voice of America, Somali, Stephen Schwartz, who served as US ambassador in Mogadishu from 2016-2017.

Biden warns of situation in Somalia as leaders convene for meeting