Thousands displaced in Amhara region as conflict intensifies in Ethiopia 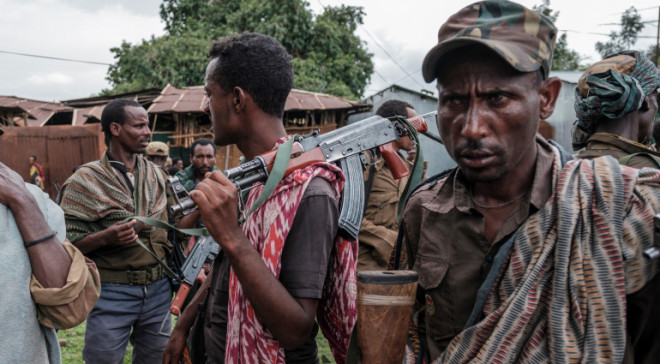 Amhara borders Tigray to the south, and the two regions are embroiled in a decades-old land dispute that has become central to the eight-month-old war in Tigray [File: Eduardo Soteras/AFP]

NAIROBI, Kenya - Martin Griffiths, the United Nations aid chief, said on Tuesday 200,000 people have been displaced by fighting in Ethiopia's Amhara region and 54,000 in its Afar region.

In recent weeks, fighting has spread into the two regions neighboring Tigray, where a war erupted eight months ago between Ethiopia's central government and the Tigray Defense Forces [TDF].

“We need 100 trucks a day going into Tigray to meet humanitarian needs," Griffiths told reporters in Ethiopia's capital, Addis Ababa, adding that the number was a "calculated need" and not "overestimated."

The U.N. aid chief also said that 122 trucks made it into Tigray in recent days.

The U.N. says that around 400,000 people are living in famine conditions in Tigray, and more than 90% of the population needs emergency food aid.

The United Nations children's agency warned last week that more than 100,000 children in Tigray could suffer life-threatening malnutrition in the next 12 months, a tenfold increase in normal numbers.

Spokespeople for the prime minister and a government task force on Tigray did not respond to a request for comment.