US to impose sanctions on saboteurs of Tigray peace deal 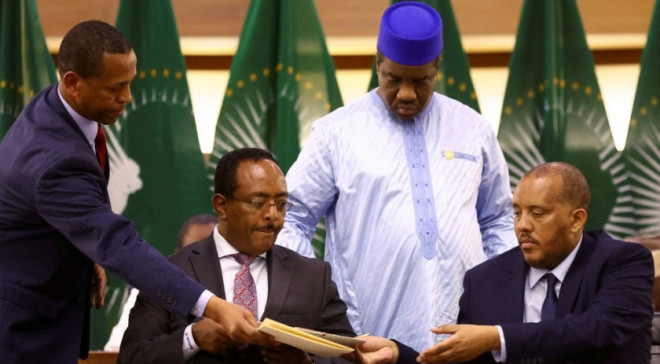 NAIROBI, Kenya - The US State Department insisted that it will impose sanctions on people believed to be saboteurs of the recently signed peace deal, noting that both parties must respect the agreement besides ensuring those violating human rights are held accountable.

Last week, the African Union team led by former Nigerian President Olusegun Obasanjo and his Kenyan counterpart Uhuru Kenyatta managed to bring together the regional government of Tigray and the federal government of Ethiopia where the peace deal was brokered.

Asked what would happen if Eritrean forces and fighters from the neighboring Amhara region do not withdraw from the Tigray region as agreed, the official said: "I don't want to get ahead of ourselves in terms of what will happen if these commitments aren't abided by," but added that sanctions are always a tool available to Washington.

"The United States always has at its disposal as a policy tool the prospect of sanctions and we will not hesitate to deploy them if that should become necessary in terms of holding actors accountable for human rights violations or for the purposes of trying to ensure that this agreement is respected and abided," the official, speaking on condition of anonymity, told reporters as reported by Reuters.

According to that official, both the government of Ethiopia and officials of Tigray have confirmed that Eritrean troops are withdrawing from Tigray and Amhara states as part of the peace process. The Eritrean troops have been accused of overseeing mass murder in Tigray for over two years.

The ceasefire deal was first signed in South Africa before the final part was concluded in Nairobi last week. According to Mr. Kenyatta, the progress report will be filed once the mediation team visits Mekelle, the regional administrative capital of Tigray, to assess the implementation status.

Troops from neighboring Eritrea, as well as forces from other Ethiopian regions, have fought on the side of the Ethiopian army. "This is the early days. It's promising in terms of the follow-on action that we're starting to see happening, but you can rest assured that we won't rest for a minute," the official said.

Both the US and the United Nations have been closely monitoring the situation in Ethiopia which started determinating in November 2020, leading to the deaths of thousands of people and the displacement of millions. The African Union has been a major mediator in the whole process, with the resumption of critical services already reported in Tigray.