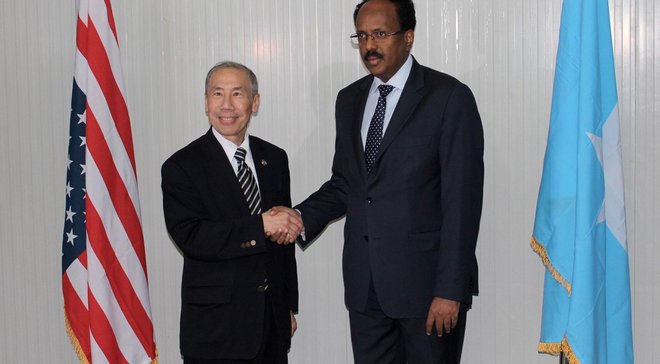 MOGADISHU, Somalia - The US has re-established a permanent diplomatic presence in Somalia more than two decades after closing its embassy in Mogadishu, the State Department announced Tuesday.

"This historic event reflects Somalia's progress in recent years and is another step forward in formalizing US diplomatic engagement in Mogadishu since recognizing the Federal Government of Somalia in 2013," department spokeswoman Heather Nauert said in a statement.

The US closed its embassy in Mogadishu in January 1991 after the overthrow of the country's President. The US took steps in 2015 to re-establish diplomatic ties with Somalia by reopening its diplomatic mission but basing it in Kenya.

President Donald Trump tapped Donald Yamamoto earlier this year to be the permanent US ambassador to Somalia, a nomination confirmed by the Senate in October. Nauert's statement on Tuesday said,

"Yamamoto and his staff look forward" to working with the Somalian government.

The East African nation has been a regular focus of US counter-terror efforts and has been subject to widespread famine in recent years.

US military strikes in Somalia have targeted suspected fighters for Al-Shabaab, a militant group linked to al Qaeda, and ISIS.

Just a day before the US said its diplomatic mission had been re-established, US Africa Command announced that US forces had conducted a strike that killed nine militants in Somalia.