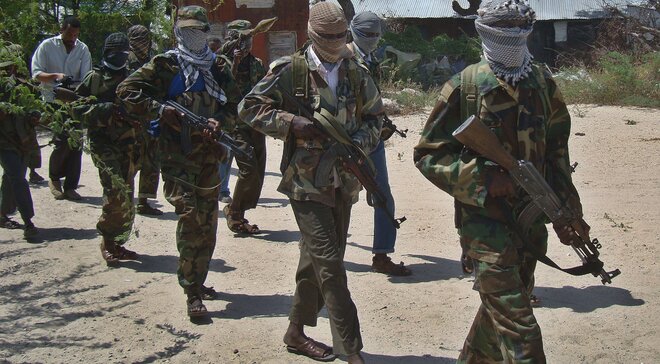 MOGADISHU, Somalia - Somalia-based Al-Shabaab militants on Wednesday attacked a base occupied by the National Intelligence Security Agency [NISA], officials said in a statement, in the latest raid which still showcases the ability of the group to launch sophisticated operations against the government.

Al-Shabaab has been fighting to topple the fragile UN-backed Somalia government, which has been placed for the last couple of years, but their efforts have often been thwarted by security forces. Al-Shabaab announced allegiance to Al-Qaida in 2010 and since then, they have carried out sophisticated attacks against security forces.

Reports indicate that the militants attack a NISA base near Beledweyne, a town located in central Somalia, within the Hiran region in a raid that lasted for several hours. Eyewitnesses said the NISA officials, mostly drawn from among the Somali National Army, responded by opening fire against the militants.

The attack left three soldiers badly wounded due to the heavy impact of mortar shells, which were fired at the base, reports indicated. The heavily armed troops engaged the militants for hours before overpowering them according to police reports.

After the incident, the militants disappeared to the surrounding bushes, and are believed to be on the run. Officials say that the SNA troops have launched a manhunt for the militants, who have been wreaking havoc in the war-torn nation for the last 14 years, killing close to 5000 innocent civilians.

This was the first attack against the intelligence team, which is headed by the former Al-Jazeera journalist Fahad Yasin. The agency is responsible for piecing together evidence that leads to the prosecution of hardcore criminals who operate with the group in Somalia.

While the motive of the attack is still unknown, Al-Shabaab is known for targeting government officials, security forces, and civilians through small to large scale sporadic attacks. NISA has presided over the prosecution of over 200 Al-Shabaab militants in the military court which is headed by Col. Hassan Nor.

NISA has, however, been facing allegations of aiding the militants in waging attacks against the AU forces working in Somalia.

However, the Federal Government of Somalia refuted the claims and accused the Kenya Defense Forces [KDF] of peddling "propaganda" against the spy agency which is critical in boosting the safety of the country.