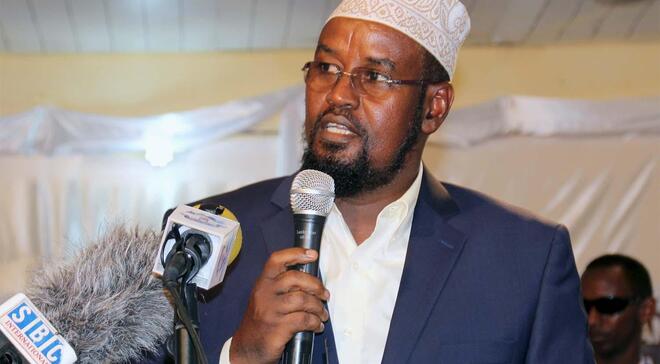 KISMAYO, Somalia - Jubaland President Ahmed Madobe has yet again accused the Federal Government of Somalia of what he refers to as "unnecessary gimmicks" aimed at frustrating the much-anticipated elections in Somalia.

Somalia is scheduled to hold parliamentary and presidential elections in the coming weeks, set to start from December. The country's leadership had settled for an improved clan-based electoral model, which would see clan elders picking electors.

Each lawmaker will be elected by 101 delegates in 11 voting areas in the country, according to an agreement signed between President Farmajo and Federal States' leaders in Mogadishu last September.

But on Saturday, Madobe insisted that Jubaland will not go to the polls unless the Federal Government withdraws the Somali National Army [SNA] from sections of the Gedo region besides handing administration units to the Kismayo-based administration as agreed during the pre-election conference in Somalia.

As part of the deal, the Federal Government had promised to withdraw the troops after protests from Madobe. The Jubaland President has been at loggerheads with Mogadishu for many months now following his re-election in August 2019 contrary to the wishes of Villa Somalia.

"As long as FGS acts outside of the Sep election deal between FGS & FMS stipulating 2 areas in each state, there will be no election in Somalia," said Madobe, who accused the government of forming rebels in his admin to hijack vote.

"Jubaland ready for an election when Gedo back in our hands," added Madobe, who is also a close ally of the Kenya Defense Forces [KDF], which controls most parts of Jubaland including Kismayo.

Among those who demanded the removal of the agents from the committee include former Presidents Sharif Sheikh Ahmed and Hassan Sheikh Mohamud along with former Prime Minister Hassan Ali Khaire. They threatened to boycott elections if their demands are not acted on.