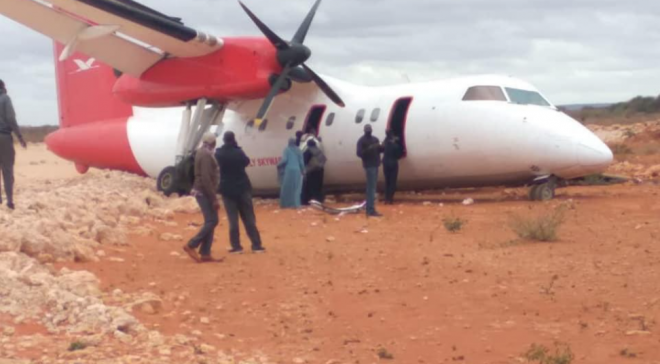 The plane had left Wilson Airport of Nairobi, capital of Kenya, and was destined for Mandera [Photo: Online]

MOGADISHU, Somalia - A Kenyan aircraft crash-landed in a closed Burohache airstrip in El-Wak, Somalia, authorities said, minutes before its scheduled landing in Mandera Airport in northeastern Kenya, where it makes regular trips.

Officials said the plane registration number 5Y-GRS DAC Aviation International De Havilland Canada DHC-8-100 had taken off from Nairobi's Wilson Airport and had 45 passengers on board. Burohache military Airstrip where it landed was closed for renovation.

All the 45 passengers in the aircraft were safely evacuated by Kenya Defense Forces [KDF] troops who man Sector II of AMISOM in the Gedo region. It was just 15 KM from Mandera where it was scheduled to land, officials added.

Those aware of the incident blamed it for a mechanical problem but added experts would investigate it. Survivors said they sustained minor injuries after the plane landed within the military camp.

Skyward officials in Nairobi promised to issue a statement after getting more information on the incident. Such planes are prone to accidents but the Kenya Civil Aviation Authority [KCAA] has often tightened rules to curb such incidents.

The Aviation Herald reports that the aircraft touched down successfully on the gravel runway at Elwak, but that one of the main landing gears collapsed. As a result, the aircraft left the runway and ended up resting on its side. Passengers can be seen leaving the aircraft on foot, but the airframe is likely to be written off.

The 5Y-GRS is identified by ch-aviation as being a 27-year-old Dash 8-100, originally delivered to Tyrolean Airways in 1994. It spent a year with Olympic Aviation from 2003 to 2004, before transferring to leasing company DAC Aviation East Africa. It is shown as being operated by DAC Aviation, presumably on a wet-lease basis, Simple flying.com reported.

Skyward Express was founded in 2013 from the ashes of Skyward International Aviation. Based out of Nairobi Wilson Airport, it operates a fleet of seven aircraft, made up of a CRJ 100, three Fokker 27s, and two DHC Dash 8-300s. The Dash 8-100 is not listed as its own plane, as it appears to be wet-leased from DAC Aviation.

Although the company claims to be separate from Skyward International, some would say the transfer of name was nothing more than a rebranding. Skyward International suffered a loss of reputation following several air accidents, with four of its Fokker 50s destroyed, according to ATDB.aero.

Data from ATDB shows that one F50 was crashed in Nairobi when the landing gear would not lower, causing it to make a belly landing. Another crashed near Ultawala after the crew ignored multiple alarms during the takeoff roll, killing all four onboard.

A third crashed during a forced landing at Aweil-Uwayl, where one of its wings was sheared off, while the fourth veered off the runway at Mogadishu after the landing gear collapsed on landing. The company has been on spot over alleged fault aircraft.