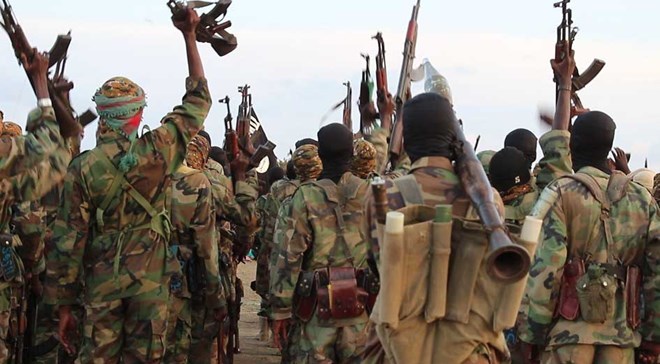 Troops selected from among Special Forces [Danab and Gorgor], joined AMISOM and US forces in the operation, which led to the liberation of the agricultural-rich town, which had been under Al-Shabaab control for a decade.

And during the crackdown which lasted for about 12 hours, the Special Forces seized a senior intelligence official, who has been actively running the Amniyat operations within the Lower Shebelle region.

Hassan Suleyt alias Hassan Ganey was arrested and bundled into the military tracks and will be interrogated to give a synopsis of Al-Shabaab operations, Abdihamid Mohamed, the SNA force commander said.

He was arrested along with two others, with one identified as Mohamud Yussuf Mansur, who until his apprehension, was the head of explosives brigade in Lower Shebelle, officials said.

“The military raided his hideout and found the man and two others, they were taken into custody. We are currently interrogating them,” said the veteran SNA commander.

At least 15 Al-Shabaab militants were killed during the sophisticated operation, which was staged a week after two drone strikes by the US military which had killed nine militants, US Africa Command revealed.

Residents were lauded for cooperating with the government troops, who launched a manhunt for the top leaders after the Al-Shabaab militants fled following a heavy gunfight.

"The public now closely works with the forces to hunt the terrorist and this is a good start, soon we will annihilate al-Shabaab from this region,” Abdihamid said in an interview.

Before Hassan Ganey was arrested, his counterpart from Mogadishu, one Muse Moalim, had been killed by fellow militants almost near Janaale, after his unprecedented resignation from the terror group.

The arrest of the two made public by the SNA radio, although the military did not disclose the name of the third person, who was only identified as Al-Shabaab "ring leader" in Janaale.

Due to it's agricultural potential, Janaale town was the source of income for the Al-Shabaab, who had imposed stringent taxation measures targeting business people and civil servants.

AMISOM described the victory as a "major success" against the militants, who have caused havoc across Somalia. Fundamentally, it also showcased SNA prowess, given that it's set to take over from AMISOM next year.

The US has described Al-Shabaab as a "dangerous group" with Gen. Stephen Townsend insisting that "this is why we are increasing our airstrikes to flush them out of their hideouts" during his presentation before House Armed Forces Committee.

So far, the group has about 7,000 active fighters but most of them are said to be either abandoning the group or moving to urban centers due to airstrikes. By last week, the US had conducted 31 airstrikes in Somalia, AFRICOM said.

Central and Southern Somalia is the worst affected regions with Al-Shabaab infiltration. For recruitment and training, for instance, the team uses Jilib town in Middle Juba, which acts as temporary headquarters.

Hassan Ali Khaire, the Somalia PM, last week said Janaale town will be under SNA which will "install new administration" as residents prepare to cope with the new life.