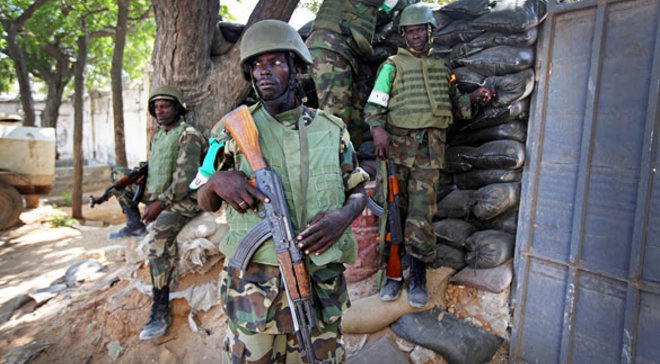 Local residents confirmed the incident to GO, saying several mortar shells landed at around the AMISOM’s main military base in Elasha Biyaha area located in the western outskirts of Mogadishu.

“We heard loud explosions as mortars rained down on a military outpost manned by Burundian troops of AMISOM contingent, but the extent of any damage was not immediately clear,” said a resident living near the attacked base.

Through its affiliated media outlets, the Al Qaeda-linked Al-Shabaab has claimed to have carried out the heavy mortar attack against the AU base at midnight, giving no further details on the casualties.

The African Union peacekeepers have responded to the attack by targeting the areas from which the shells were launched, inflicting heavy losses upon the villagers, according to the sources.

On Tuesday morning, a suicide bomber from Al-Shabaab rammed a vehicle packed with explosives into a military convoy carrying U.S.-trained Somali commandos in Afgoye district, situated about 30 kilometres northwest of Mogadishu.

Although UN-backed African Union troops and their allied Somali National army have pushed Al-Shabaab out of most significant strongholds in the country, the extremist group retains the capacity to carry out deadly attacks.