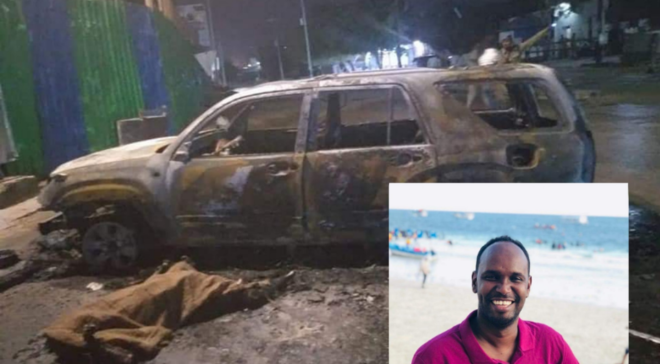 The engineer who was identified as Mohamed Abdi Kariye succumbed to critical wounds he sustained last Thursday night after an explosive device fitted to the vehicle exploded at the busy Km-4 junction.

"He was seriously injured in the car bomb and rushed to a hospital, where he was being treated for critical injuries until he was pronounced dead late night hours," said a medical official.

Kariye who studied in Lahore, Pakistan has recently returned to Mogadishu and was working for a local construction company. No group has so far claimed responsibility for the engineer's assassination.

The blast, described by police as a "terrorist act," is the second in the city this week.

A senior official with the Criminal Investigation Department [CID] and former district commissioner of Daynile Dahir Hassan Hussein wounded in IED explosion in his car last Tuesday evening in the same area.

The latest car bomb attacks come as Somali forces continue to vacate the frontlines and bases in Lower and Middle Shabelle regions near Mogadishu over lack of pay.