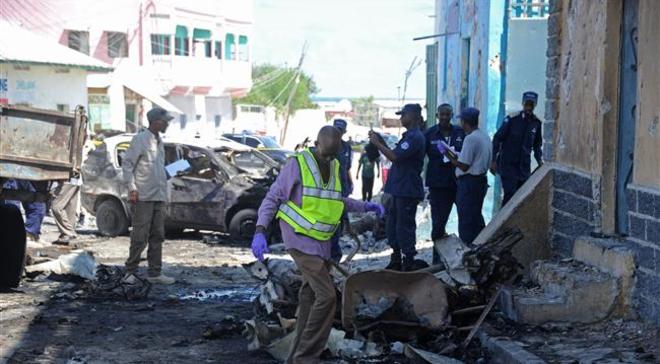 The roadside Improvised Explosive Device [IED] targeted an army vehicle ferrying troops within Karan District in the Banadir region, which hosts the capital, Mogadishu, that has recently enjoyed relative peace.

The four civilians were injured by rubbles smashed into them due to the powerful explosion. All of them were passersby and have since been evacuated for treatment in a city hospital, police reports indicate.

Witnesses said the army narrowly escaped the bomb explosion, which would have led to massive deaths on the side of the forces. The mission of the troops is yet to be established but they are synonymous with regular patrols in Mogadishu.

Security forces arrived at the scene and have since launched investigations to the incident. However, the police are yet to release information surrounding the circumstances behind the latest explosion.

Until now, no group is yet to take responsibility for the attack, which comes at the time authorities in Somalia imposed a dusk-to-dawn curfew within Mogadishu, the epicenter of the dangerous Coronavirus.

By Monday, Somalia had recorded 62 COVID-19 positive cases. Five of the cases were reported in secessionist Somaliland while two were registered in Jubaland. The rest are in Mogadishu, officials said.

Of that number, one has since recovered while two succumbed to the virus. One of the victims was a 58-year-old man without traveling history while the second victim was a state minister for Justice in HirShabelle administration, officials added.

But previously, Al-Shabaab militants have often taken responsibility for the IED attacks targeting security forces, mostly the police, SNA and troops from AMISOM participating in a peacekeeping mission.

The most recent attack in Mogadishu in which Al-Shabaab claimed responsibility targeted a busy restaurant. Four people among them a male suicide bomber denied on the spot, police reports indicated.

Al-Shabaab has been fighting to reclaim the capital, Mogadishu which they lost to allied forces in 2011. But in the process, the Al-Qaida linked group which controls large swathes of rural southern and central Somalia has suffered numerous setbacks.

For instance, the group lost close to 140 fighters last month in Janaale, southern Somalia, where it had held authority for a decade. Government troops have since established a civilian administration in the agricultural-rich town.

Most recently, the US military has heightened aerial airstrikes in Somalia, killing a total of 62 militants since January 2020. This was achieved in the record 39 airstrikes, AFRICOM said.

Among those who died in the airstrikes include Bashir Qorgab and Yusuf Jiis, two most wanted Al-Shabaab operatives in Somalia. Bashir Qorgab was linked to the Manda Airfield attack in Kenya which targeted US Naval Base, authorities said.

There are close to 7,000 active Al-Shabaab fighters in Somalia according to figures obtained from US Africa Command. Most fighters have since defected while others have moved to safe urban centers, the UN said in a report.