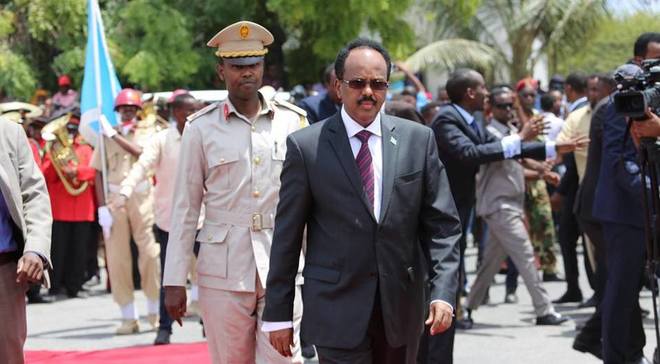 On arrival to the port town, President Farmajo and his delegate, including ministers and Federal lawmakers received a warm welcome from Jubaland President Ahmed Madobe and officials from his state government.

Farmajo is expected to visit a military camp in Kismayo town, and boost morale of integrated soldiers prepared to carry out major offensive to flush out al-Shabab fighters from Middle and Lower Juba regions.

The town’s overall Security has been beefed up by joint forces who locked down the main streets ahead of the President’s arrival, to deter possible terror attack by al-Shabaab group.

This is the fourth domestic visit by President Farmajo since taking office in mid February. He previously paid similar visits to Afgoye, Baidoa and Adado towns.

The Federal Government is mobilizing national and regional forces in several areas in the country, in a bid to end the seven-year insurgency of al-Shabaab in the next 2 years.