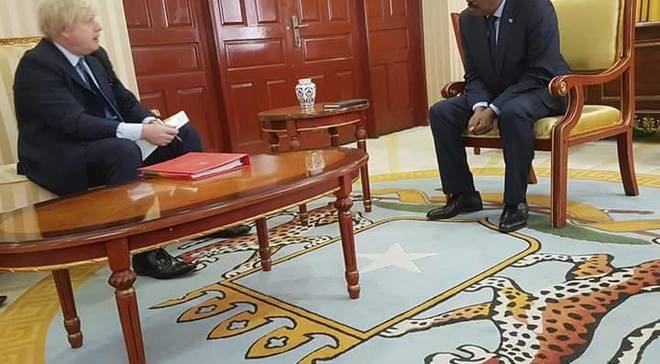 On arrival, Johnson was cordially welcomed by high-ranking government officials and then escorted to the British embassy in Aden Adde International Airport in Mogadishu.

Subsequently Johnson met with the new Somali President Mohamed Abdulahi Farmajo at the state House "Villa Somalia" and discussed on wide range of issues mainly on the drought response and the upcoming London conference on Somalia which is expected to be held in May.

International donors, Somalia's partners, INGOs and UN officials are set to attend the high-level London conference, which will focus on rebuilding the country, security and to show solidarity with the new Somali Federal government.

Last month, British government has announced £100 million aid package to Somalia in response to droughts and emergency health care for millions of people affected by the biting drought.

Britain is providing security support to Somalia and to the African Union forces (AMISOM) to tackle Al Shabaab, with around 70 British military personnel deploying to Somalia.