Manchester United will continue fighting for every trophy, says Herrera 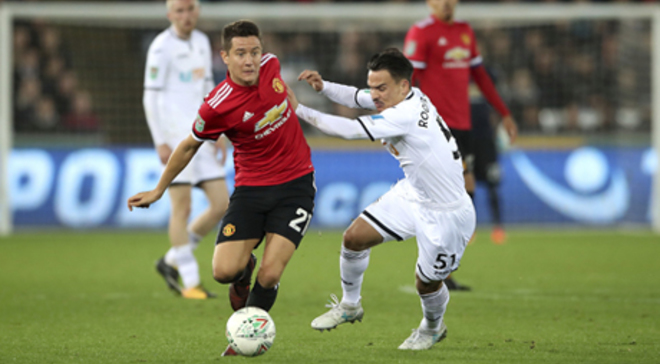 Manchester United midfielder Ander Herrera has said the Premier League club will continue fighting for every trophy after reaching the fifth round of the FA Cup with a 4-0 win over Yeovil Town on Friday.

Herrera, who made his 150th appearance for the club, struck after forward Marcus Rashford's opener while late goals from midfielder Jesse Lingard and striker Romelu Lukaku sealed an emphatic victory over the League Two (fourth-tier) club.

United are second in the Premier League, 12 points behind runaway leaders Manchester City, and face Spanish side Sevilla in the last 16 of the Champions League next month.

"We have won the FA Cup two seasons ago and last season we won three trophies, so this club is about titles, and we are not going to give any competition away, we are going to fight for everything," Herrera told the club's website (www.manutd.com).

"I think we can be optimistic for the rest of the season. But we must know in the Premier League every team can beat you if you sleep for just one second so we have to be ready for the next game against Tottenham on Wednesday."

The clash against Yeovil marked the debut of new signing Alexis Sanchez, who made an immediate impact with two assists following his move from Arsenal last week.

"Alexis played very well, but what I like from him is the way he fights when he or the team lose the ball," Herrera said. "He is ready to be the first defender of the team, so that is going to be very important for us.

"Of course we know his quality is going to be amazing for us, but the way he fights, the way he defends, I really like."

United, who are unbeaten in their last eight league games winning the last three, take on fifth-placed Tottenham Hotspur at Wembley on Wednesday.