Ethiopia allows flights to Tigray, none yet to take off from Addis Ababa 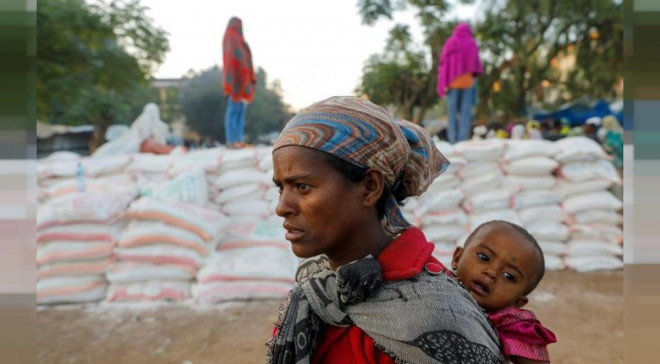 NAIROBI, Kenya - Authorities in Addis Ababa said humanitarian flights can take off to the Tigray region, which has been embroiled in a deadly war for the last eight months, amid concerns from the international community, which has been pushing for restoration of others in the north.

The international community had raised concerns given aid wasn't reaching people racing famine, but despite Ethiopia claiming to have cleared the flights, civil aviation noted that no such flights have taken off from Addis Ababa.

For all these months, the Ethiopian National Defense Forces [ENDF] has been battling with Tigray People's Liberation Front [TPLF], otherwise known as Tigray Defense Forces [TDF], which the administrations often label as "terrorists".

TPLF seized Mekelle, the regional administrative capital of Tigray, which had been under the control of ENDF, but the government insisted it had willingly withdrawn to allow humanitarian groups to help innocent civilians. TPLF has since claimed victory in the conflict.

"Since Monday, July 5, 2021, the Federal government has granted flight permission for all interested parties to provide humanitarian services in the Tigray region," authorities said on Twitter.

But Wesenyeleh Hunegnaw, director-general of the Ethiopian Civil Aviation Authority, said no such flights had taken off from Addis Ababa this week.

"It [permission] has to be processed by the Ministry of Foreign Affairs and then has to come to us. So far, we have received nothing from MFA," he told Reuters.

"And no flight has departed from Addis Ababa to Mekelle. If there were any, I would know."

OCHA, which is the UN humanitarian agency, told Reuters in a brief statement that it welcomed the Ethiopian government's announcement.

"Unfortunately, no flights have yet been able to travel directly from Addis Ababa to Mekelle or [the northern town of] Shire this week," OCHA's Guiomar Pau Sole said. "However, we are following up with all relevant actors to ensure that direct flights are able to operate as soon as possible, in light of this announcement."

The United Nations said on Friday shortages of food had worsened dramatically over the past two weeks and some 400,000 people in Tigray were now estimated to be in famine, with another 1.8 million on the brink of famine. read more

Also on Friday, the government denied blocking humanitarian aid to Tigray and said it was rebuilding infrastructure amid accusations it is using hunger as a weapon.

It was not immediately possible to reach the TPLF or any of the Tigray region's leaders for comment. Last week, a spokesperson for the TPLF condemned the government’s shutdown of services, including air transport, as a continued act of war.

Pressure is building on both sides to end hostilities so that aid can reach the starving. The commander of the Tigrayan forces on Tuesday called for a negotiated ceasefire with the government and a political solution, saying the government could not win the war. read more

Aid agency Medecins Sans Frontieres [MSF] on Wednesday called for an investigation into the deaths of its three employees killed by unknown assailants in Tigray last month.

MSF said it was pulling back its activities in Abi Adi, Adigrat, and Axum, in central and eastern Tigray, while it will continue to provide assistance to people in urgent need in other areas.

"At this terrible time, we have made the extremely painful but necessary decision to suspend our activities in several areas of Tigray," MSF operations director Teresa Sancristoval said in a statement.