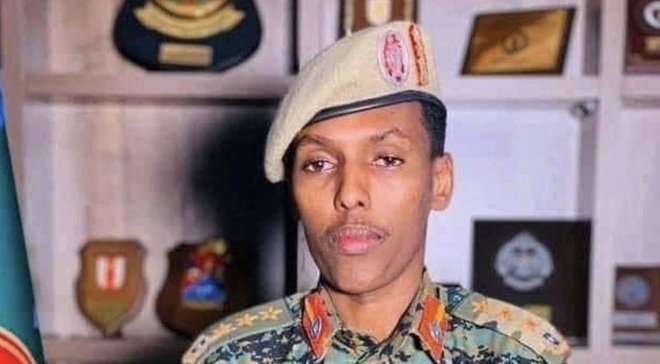 MOGADISHU, Somalia - Somalia-based Al-Shabaab militants on Monday claimed responsibility for the attack which targeted the country's military chief General Yusuf Rageh Odawaa, which took place within the capital Mogadishu and has since raised questions about the country's stability.

In a statement issued by proxy media outlets, Al-Shabaab said the VBIED struck the convoy of the military chief, between the national stadium and the SNA hospital within the Hodan district of Mogadishu, leading to "massive" destruction.

The attack, the Al-Qaeda-linked militants said, left five soldiers guarding the military general dead and nine others seriously injured. The militants released photos purportedly of the soldiers lying dead near the alleged scene of the incident.

"The fighters targeted a rebel commander of the apostasy group in the area around the Ministry of Foreign Affairs. He narrowly survived the attack but five of his guards were killed and nine others injured," read the Al-Shabaab statement.

Several vehicles were destroyed during the midday attack, which was the first targeting a sitting army boss in the Horn of Africa nation in as many months. Gen. Rageh was evacuated from the scene by his commandos, but the government is yet to issue a statement.

Sources in the military said Gen. Yusuf had just left the Ministry of Defense where he visited new cadets training center before his convoy was entangled in the unprecedented attack. His bodyguards in his convoy sighted the suicide bomber's car parked along the same lane they were traveling in.

The guards, reports indicate, fired at the car and injured the suicide bomber before he sped off and drove along the vehicle carrying Gen. Rageh, where he detonated himself, destroying the commander's vehicle. Military sources said Rageh's driver and one soldier were injured.

Gen Rageh is the first army chief to have received all his ranks while fighting against Al-Shabaab, and the group profiled him as an "antagonist" who is hell-bent to see Mogadishu administration "curtailing" freedoms of the people.

His steady rise in ranks was preceded by high profile battles against the Al-Shabaab including the mid-August 2019 ambush against SNA troops at Awdhegle town where the militants ran over the camp and seized it temporarily. Gen. Rageh led his team in repulsing the attackers.

"He personally took his AK-47 and led the fight," Mohamed Abukar Aweys, the mayor of Awdhegle, who was at the base that morning, told Voice of America. "I saw him encouraging the soldiers to fight."

The SNA troops have been carrying out operations against the militants across the country, and the exercise has been fruitful following ongoing mass defections of the militants. Some of the high ranking Al-Shabaab officials have also been killed in recent months.

SNA troops are expected to take over security responsibilities in Somalia from 2021 when the African Union Mission soldiers formally leave the country. Somalia is struggling to rebuild after years of turmoil mainly engineered by the inter-clan conflicts and terrorism.