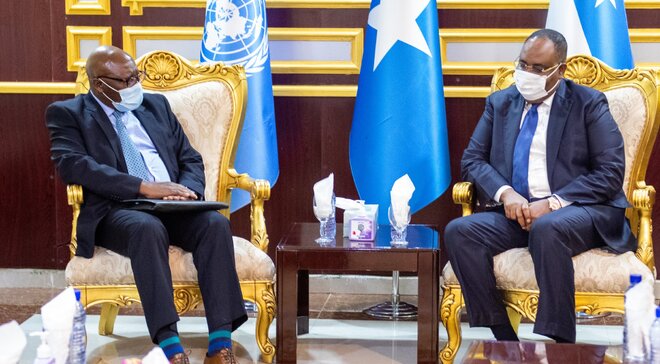 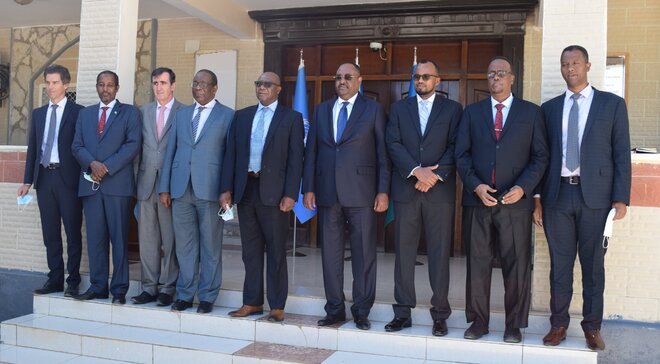 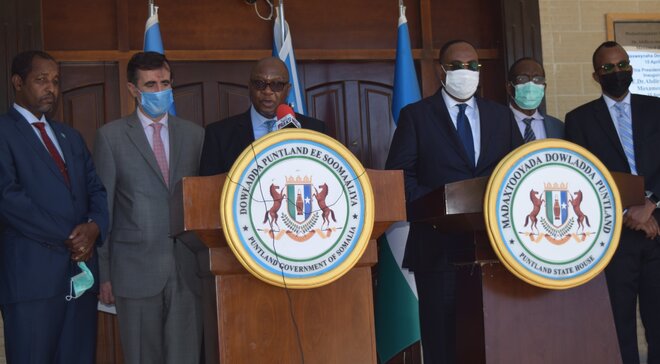 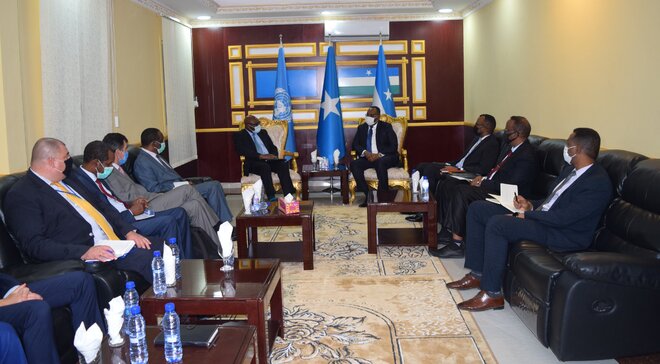 MOGADISHU, Somalia - Amid the ongoing political quagmire in Somalia, members of the international community have continued to tour several parts of the country where they are asking local leaders to support dialogue as a way of solving the current stalemate in Somalia's elections.

With just a few days to the scheduled parliamentary polls, the political leadership is yet to strike a compromise after the opposition accused President Mohamed Abdullahi Farmajo of picking his loyalists to the polls committee. They called for the disbandment of the team.

At Garowe, the regional administrative capital of Puntland on Sunday, the team emphasized the need for Somali leaders to remain in dialogue with one another, as well as continue in the spirit of consensus which has recently seen progress on preparation for national elections.

“We continue to urge all of Somalia’s leaders to remain steadfast in their commitment to collaborating with each other as the progress of the electoral preparation,” the UN Secretary-General’s Deputy Special Representative for Somalia, Raisedon Zenenga, told the media.

“At the same time, we believe that the resumption of such dialogue, on a regular basis, can help resolve outstanding issues,” he added.

The UN official was speaking at a joint media encounter with Puntland’s President Said Abdullahi Deni, with whom he and the Special Representative of the Chairperson of the African Union (AU) Commission, Ambassador Francisco Madeira; the European Union’s (EU) Ambassador to Somalia, Nicolas Berlanga; and the Intergovernmental Authority on Development (IGAD)’s Head of Mission for Somalia, Jamal Ahmed Ibrahim, had just met.

Sunday's visit to Puntland was the third across the country and the team comprised representatives from AU, EU, IGAD, and UN representatives in the past two months. It follows on from visits to South West State and Galmudug, with visits to the remaining FMSs – Jubaland, and Hirshabelle – planned in the near future.

In his media remarks, made on behalf of the visiting delegation, the UN Deputy Special Representative said the importance of strengthening relations between the Federal Government of Somalia and the FMSs had been discussed in the meeting with President Deni.

The top envoy noted that the international partners had been encouraged by the revitalization of dialogue between the Federal Government and the FMSs in recent months and highlighted President Deni’s “active role” in them.

Somali’s federal and FMS leaders began a series of meetings in Dhusamareb, the capital of Galmudug, in July and August, which led to consultative meetings in Mogadishu in September and October and at which agreements on the national electoral model were reached.

“The dialogue and spirit of consensus which yielded these agreements need to continue in order to ensure that the national elections remain on track and are anchored in transparency, fairness, and inclusivity,” Mr. Zenenga said.

While highlighting the benefits of regular dialogue as beneficial to resolving any outstanding issues, the UN official also stressed the need for the electoral agreements to remain in place as had been decided.

“We wish to emphasize that the agreed electoral model should not be re-opened but has to be implemented in an acceptable, credible, and transparent manner,” Mr. Zenenga said.

Somalia has been beset by three decades of conflict and is now on the path to recovery despite numerous challenges, including security and political issues as leaders are yet to agree on the election body.