Security forces engage in gunfight with militants in Somalia’s capital 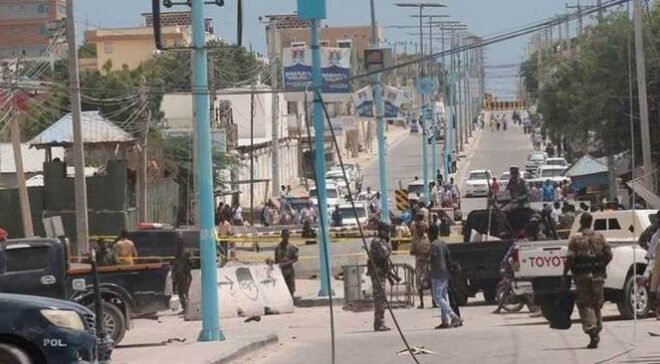 MOGADISHU, Somalia – At least three people have been killed and several others wounded on Sunday after Al-Shabaab militants attacked intelligence officers in the Somali capital, Mogadishu, police said.

“The pre-dawn attack resulted in the deaths of two intelligence agents and one militant while at least 4 others have sustained wounds and were admitted to a nearby hospital,” said Ahmed.

Al-Shabab militants reportedly destroyed four newly installed surveillance cameras in the capital Mogadishu, blowing them up with explosive devices in the early morning on January 29.

Following the deadly gun assault, police tightened security in the vicinity and nearby areas around the presidential palace to avert further attacks from the Al-Qaeda-linked extremists.

The National Intelligence and security agency [NISA] placed the closed-circuit television (CCTV) cameras in December 2019 in a move to cut crime and also prevent attacks by the militant group, Al-Shabaab.

In January of this year, Al-Shabab militants destroyed four newly installed surveillance cameras [CCTV] in the same main street, blowing them up with explosive devices in the early morning attack.

Last year, militants told businesses to remove private CCTV cameras installed outside their premises, saying they would bomb the buildings of those who ignored the orders.

There have been such clashes in the capital in the past with the Somali government trying to hold peaceful parliamentary and presidential elections by the end of this year and February 2021.

Somali forces are embroiled in a fight with militants in the southern regions with the help of their AU and U.S. allies providing them vital support in the struggle to regain the whole country.