​Somalia to wrap up Lower House elections in the capital 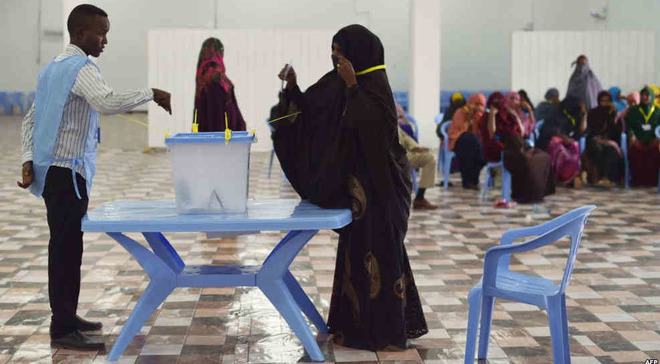 MOGADISHU, Somalia- The final ballots to elect the remaining MPs from Somaliland community in the country's Lower House chamber is taking place in Mogadishu on Wednesday, Garowe Online reports.

According to the electoral commission, three seats will be voted today in Mogadishu, to complete the 46 seats in the Lower House chamber allocated for the clans in northern Somalia.

Wednesday's election of the last three seats for Somaliland community will mark the end of the voting process for the Lower House polls Somalia's regional clans.

On Tuesday, the remaining two MPs for Banadiri clans were elected in Mogadishu, completing the seven Lower House seats allocated for Banadiri community.

The MPs of both houses in the new Federal Parliament are set to elect a new president in a secret ballot that will be in late January or first February as officials estimate.

The presidential election has been delayed several times amid low progress of the parliamentary voting which was overshadowed by allegations of fraud and intimidation.

The international community have expressed concern over the repeated presidential election delays, and called Somali leaders to ensure transparency and credibility of the electoral process that was marred by fraud.