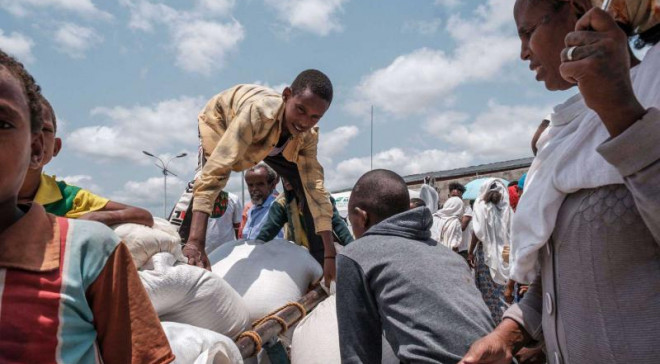 A youngster arranges a sack of wheat on a cart during a food distribution near the village of Baker in the Tigray Region of Ethiopia, last July. (AFP)

NAIROBI, Kenya - The Tigray Defense Forces [TDF], which now controls most parts of northern Ethiopia, has been linked to looting of aid supplies, despite its commitment to ensuring humanitarian groups reach most parts of the region.

USAID, the agency responsible for the supply of humanitarian aid across the world, accused TDF of looting supplies from warehouses calling the alleged thefts a "great concern for humanitarians".

"We know for a fact... that the TDF, every town they've gone into they looted the warehouses, they've looted trucks, they've caused a great deal of destruction in all the villages they visited and it's a great concern for humanitarians," Sean Jones, head of the USAID mission in Ethiopia, told Ethiopian state television EBC.

"I do believe that TDF has been very opportunistic. Maybe they are stealing from citizens, we don't have proof of this.

"What we do have proof of is that several of our warehouses have been looted and completely emptied in the areas, particularly Amhara, the TDF soldiers have gone into," he said.

However, TDF could not immediately be reached for comment. In the past, TDF has been accusing Ethiopia National Defense Forces [ENDF] of blocking aid agencies from accessing northern Ethiopia, even going to the press, calling for humanitarian assistance.

Tigray region has been wracked by violence since November, when Prime Minister Abiy Ahmed sent troops into Tigray to topple the TDF, the regional ruling party, saying the move came in response to attacks on army camps.

Although the 2019 Nobel Peace Prize winner promised a swift victory, the war dragged on for months, triggering a humanitarian crisis in Tigray. The rebels meanwhile have pushed into the neighboring Afar and Amhara regions.

Jones said USAID provided food support to five million people in the north, "inside of Tigray but also now in Amhara and Afar". Abiy rejected early appeals from high-level envoys from the AU for talks with Tigrayan leaders, sticking to his line that the conflict was a limited "law and order" operation.

Last week, the bloc announced the appointment of Nigerian former President Olusegun Obasanjo as a high representative for the Horn of Africa, saying it was part of a "drive to promote peace, security, stability & political dialogue".

But on Sunday, TDF spokesman Getachew Reda dismissed the initiative, accusing the African Union of being biased in favor of the Ethiopian government.

Since the conflict erupted, Abiy's government and the Tigrayan rebels have traded blame over the issue, with each side accusing the other of obstructing aid convoys and driving a desperate population into famine.

As the conflict has deepened, the humanitarian toll has surged, with aid workers struggling to reach cut-off populations and 400,000 people facing famine-like conditions in Tigray, according to the United Nations.

Last Thursday, the UN's humanitarian agency OCHA said the flow of aid to Tigray had virtually stopped since August 20, with no trucks able to enter the region.

"Stocks of food assistance are depleted, and new distributions of food have stopped, other than in areas where supplies were already dispatched and en route," OCHA said in a briefing note

A US Treasury Department statement said Eritrean Defense Forces [EDF] troops had raped, tortured, and executed civilians as well as destroying property and ransacking businesses. The EDF is also believed to be preparing for a crackdown in the Tigray region.